2020 Estate of the late Eduardo Cojuangco 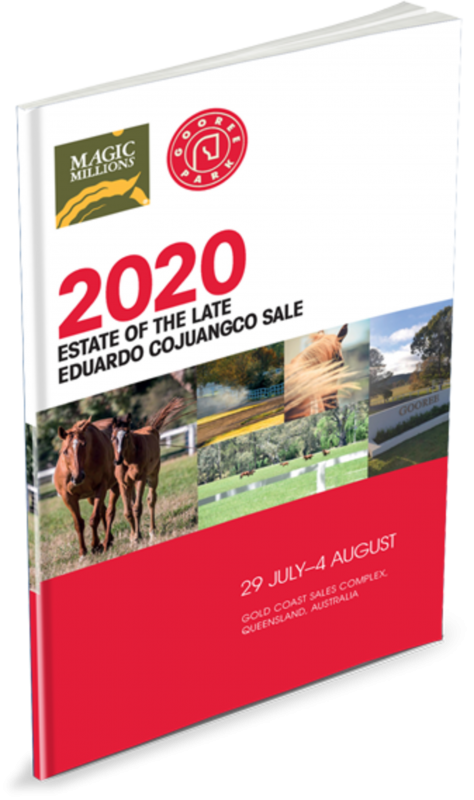 The catalogue comprising stock on behalf of the Estate of the late Eduardo Cojuangco is online and details of the selling times at the upcoming Magic Millions National Sale are confirmed.

The 41 lot catalogue of yearlings, race fillies, broodmares and racehorses will present buyers with a unique opportunity to invest in the history of one of Australia’s finest thoroughbred nurseries, Gooree Park Stud.

All lots will be offered without reserve and a standalone printed catalogue will be available from the Magic Millions Sales Day office.

The details of the draft is as follows:

The 12 lot draft includes eight race fillies and four broodmares. The race fillies are by sires including Snitzel, I Am Invincible, Lonhro, Artie Schiller and Smart Missile and include (at least half) relations to stakes winners Your Song, Good Standing and Tactical Advantage. The four broodmares include three in foal to Champion American Triple Crown winner American Pharoah.

The 11 lots include youngsters by sires Exceed and Excel, All Too Hard, Artie Schiller, Hallowed Crown, Shalaa and Your Song. The yearlings include (at least half) relations to stakes winners Hallowed Crown, Your Song, Needs Further and Tactical Advantage. There’s also yearlings from stakes performers Crowned Glory, Sensible Lady, Ocean Tempest and Above Perfection.

The 2020 Magic Millions National Sale commences at the Gold Coast on July 27 – all original scheduled selling days have been delayed seven days – refer to the Magic Millions website for full details and online catalogues.