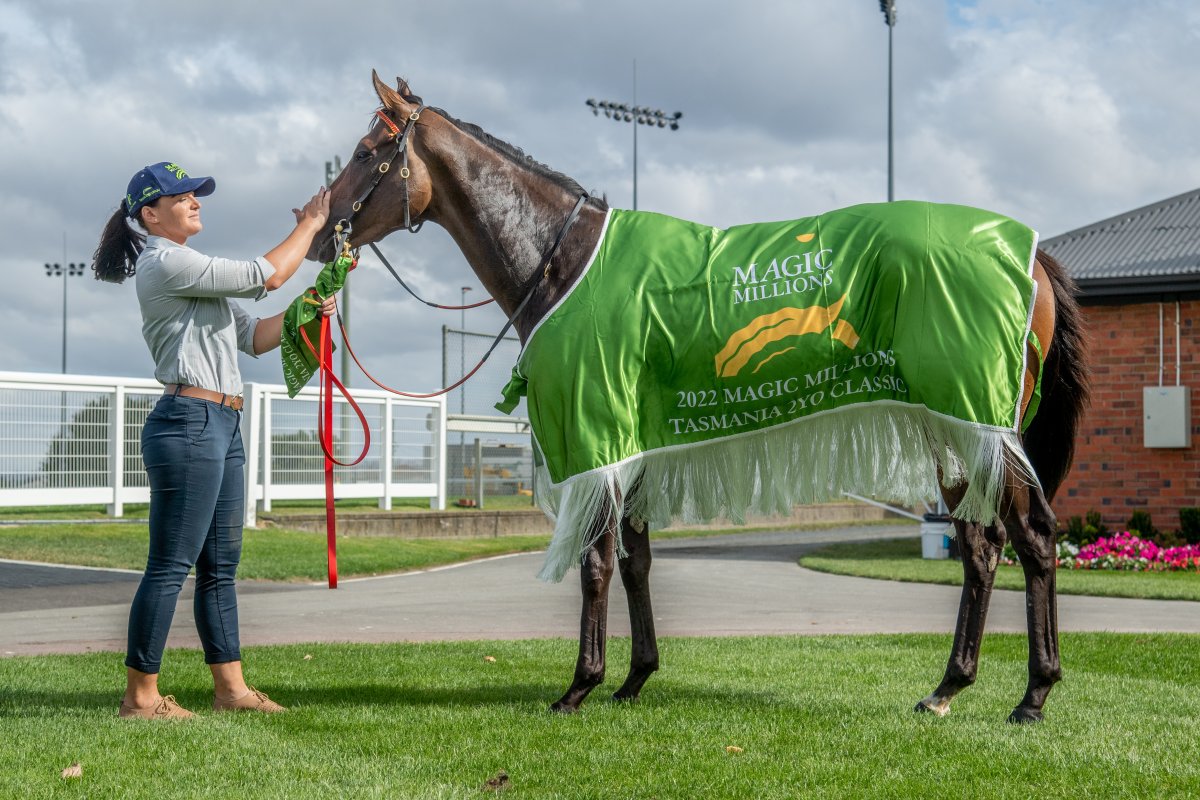 Magic Millions, in conjunction with Tasracing & Tasbreeders, is proud to support the state with two races offering a total of $150,000 in prizemoney, including the $65,000 3YO & 4YO Classic. Both features are quality races and highly contested, as shown by past winners of the Magic Millions Tasmania 2YO Classic such as Turk Warrior, Deroche, Hot Dipped and Gold Busker, who also won the Listed Gold Sovereign Stakes during their juvenile seasons. The 2022 edition of the 2YO race produced the first dead-heat in Magic Millions history when Jaguar Stone (Adam Trinder) and Blonde Venture (Shane Nichols) could not be separated by the judge.

For the sixth time in 2023, Tasracing & Magic Millions are proud to offer a $10,000 Racing Women’s Bonus to connections of the first all female owned (or leased) 2YO in finishing order in the 2023 Magic Millions 2YO Classic. Conditions apply, see below.

In 2018, the inaugural Magic Millions-Tasracing Racing Women’s Bonus was won by Tiesto, who ran 2nd in the 2YO Classic (behind Our Long Sali), and was trained by Ken & Tanya Hanson and owned by a group of eight happy women. In 2019, the Magic Millions-Tasracing Racing Women’s Bonus was won by Chase on the Case, trained by Matthew Brown, whilst in 2020 Gamble in Paris took home the Bonus monies. In 2022, the Leanne Gaffney trained Vokes took home the $10,000 Bonus for her ecstatic ownership group of eleven women, when finishing third past the post.

The connections of the winners of both Magic Millions races will also win a $5,000 sales credit vouchers towards purchasing at the 2023 Tasmanian Yearling Sale.

For further information on the national program of races or to check if your horse is eligible to compete please email [email protected] or telephone 07 5504 1220.

In addition to total race prizemoney of $75,000, a $10,000 Bonus will be distributed to the first all-female owned or leased horse in finishing order in the Magic Millions 2YO Classic, being run at Launceston on Sunday 19 February 2023.

To be eligible for the MM/Tasracing Racing Women’s Bonus in 2023 the two-year-old horse must be:

The horse must officially finish the race to be eligible to receive the Bonus.

In the event of a dead heat between more than one eligible horse, the Bonus will be divided equally.

Should an eligible horse be subject to pre or post-race drug testing by the Stewards, the Bonus will not be distributed until the result of the swab/s have cleared in accordance with the Australian Rules of Racing.

Should there be no Bonus eligible horses contest the Magic Millions 2YO Classic at Launceston on 19 February 2023, the Bonus will not be distributed.

Magic Millions TAS 3YO & 4YO Classic