In extending his unbeaten run in Sydney to nine, Pierro held out champion mare and highly regarded stablemate More Joyous in a thrilling edition of the race – the first time at Group One level.

Cassidy, riding the Gai Waterhouse trained colt for the first time, said Pierro was a better horse than Might and Power and called on all-comers to take on the three-year-olds.

“Look, I put this bloke above Might and Power. He’s a very special horse,” Cassidy added.

“To do what he did as a two-year-old, to do what he’s done as a three-year-old – he’s come back, won the Hobartville first up, come back to 1300 and win the way he won today, I don’t like using the word freely, but he’s every bit a champion.”

“Only champions can do what he’s done. Come back, take on the older horses and the sky’s the limit for him. Bring on All Too Hard, whatever you like, he’ll deal with them, don’t worry about that!”

Pierro, sold twice by Magic Millions, has raced on 12 occasions for 10 wins and two placings. His earnings have grown to over $3.89 million. His value as one of the world’s hottest sire prospects is anyone’s guess.

Waterhouse said the son of Lonhro was on track for the Group One Doncaster Handicap. A win there would see his earnings fly past $5 million.

Bred by the Australian arm of Sheikh Mohammed’s powerful Darley operation, Pierro was originally sold through that draft the 2010 Magic Millions National Weanling Sale for $115,000.

He was purchased on that occasion by Victorian based breeder David Kobritz and then grown out at his Musk Creek Farm property before selling for $230,000 to Waterhouse at the 2011 Magic Millions Gold Coast Yearling Sale.

Raced by Sydney based couple Greg and Donna Kolivos, Pierro is the pin up performer to date for leading Darley based sire Lonhro.

He is from the French and Sydney winning Daylami mare Miss Right Note – a half sister to European based multiple Group One winner Laverock.

Laverock is a close relation to Pierro being a son of Octagonal – the grand sire of the current day Australian champion.

Pierro was one of seven individual stakes winners on the day sold by Magic Millions. 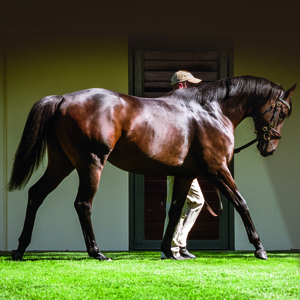