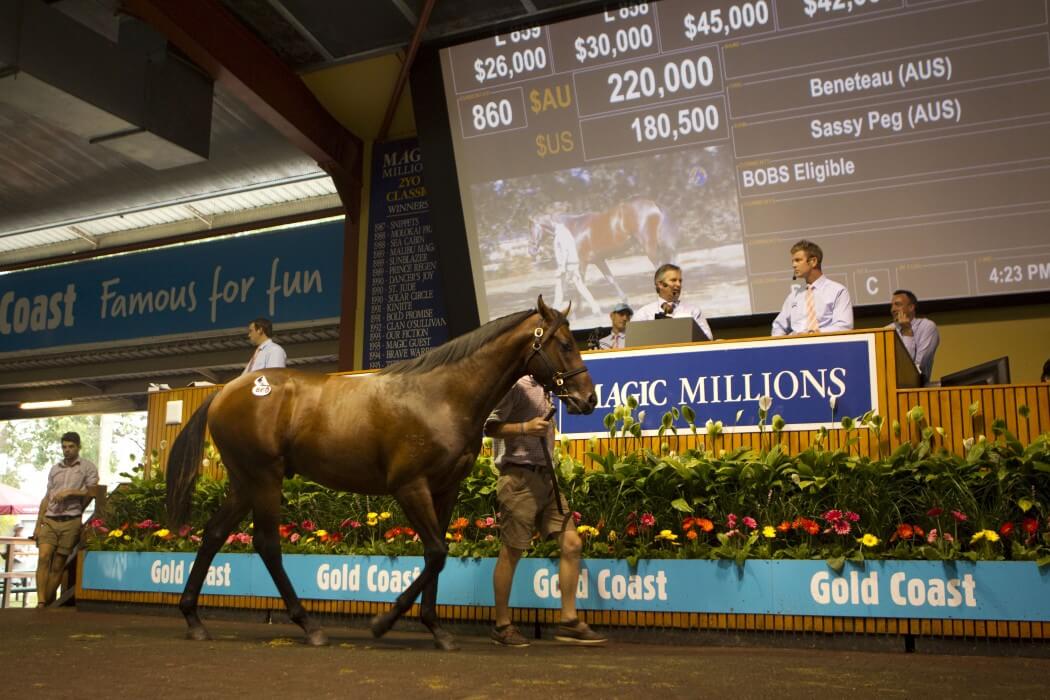 Blue Sky Bloodstock went to $220,000 to secure the Arrowfield Stud consigned youngster to continue their great assocation with the sire.

“We’re obvously very interested in his progeny after buying Beneteau as a yearling and the early success with Prompt Return,” Blue Sky Bloodstock’s Julian Blaxland reported. “We purchased three of his stock today and they will be raced by Mark and Ron.”

“I thought the Sassy Peg was an outstanding individual and he happened to be by Beneteau so we had to have him.”

Blaxland said connections would let the dust settle on the sales before deciding who would train the youngsters but he suggested Prompt Return’s trainer Danny O’Brien would be keen to train today’s top seller.

Over $9.86 million was traded on 179 lots sold on Sunday at a clearance rate of 88 per cent. The average price of $55,101 was 15 per cent higher than last year’s corresponding session.

Magic Millions Managing Director Vin Cox was thrilled with Sunday’s results after the success of the Book 1 sale which concluded on Saturday night.

“The momentum built up from Book 1 carried through to Book 2,” Cox said. “There was a big crowd on hand and very competitive bidding from start to end which is reflected in the outstanding 87 per cent clearance.”

“The total sale has now grossed over $102.6 million which is the biggest yearling sale conducted in the Southern Hemisphere in almost seven years.”

“We wouldn’t have had the buying bench that we attracted without the outstanding support of our vendors right around the country that were handsomely rewarded in the Magic Millions sales ring.”

“From a Magic Millions perspective it has been tremendously rewarding to be given the privilege to sell these horses and to host so many of our friends from all over the world – new and old.”

“The Magic Millions staff have worked exceptionally well to put on a tremendous show which began with the first inspections through to the last lot this evening – it is a great team!”

To see the results from Books 1 and 2 and to make an offer on a passed in lot and to view Tuesday’s line up of yearlings click here.

Selling will resume on Tuesday with a 47 lot yearling catalogue followed by a racehorse sale with 62 lots – click here to view them online.