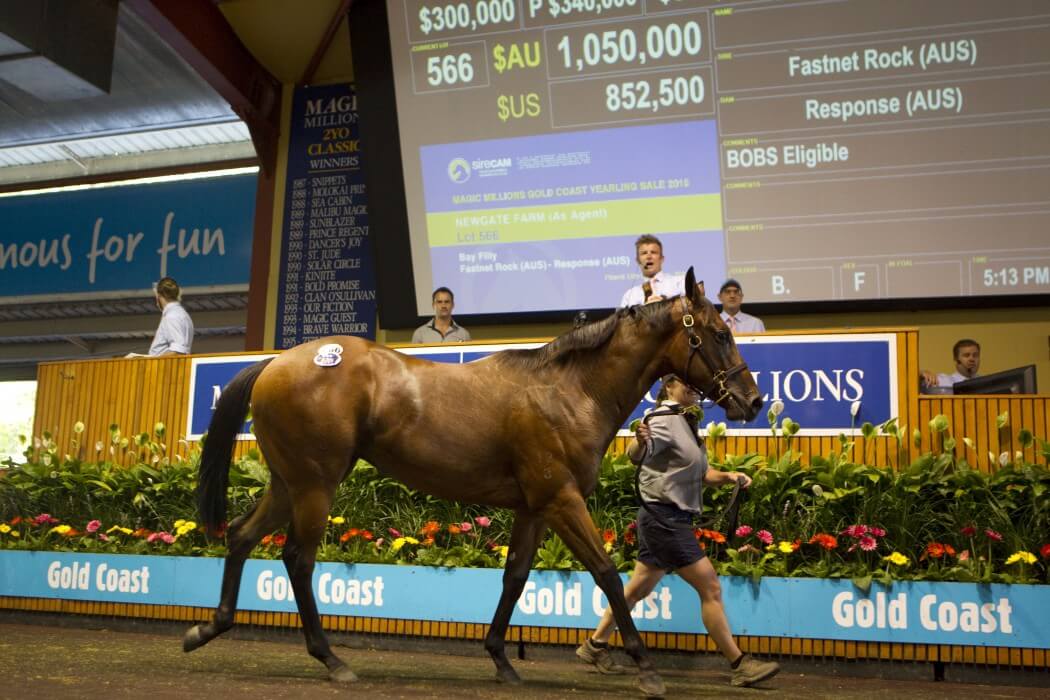 A quality filly by champion sire Fastnet Rock has topped Day Three of the Magic Millions Gold Coast Yearling Sale after passing through the magical seven figure barrier to sell for $1.05 million on Friday.

Offered for sale by Newgate Farm, the filly from multiple Group One winner Response, was knocked down to Michael Wallace on behalf of the China Horse Club after a bidding battle with the team from Kentucky’s Spendthrift Farm.

Wallace was delighted to be able to purchase the star filly and in doing so set a new top seller for the auction after he paid $850,000 for the Sepoy-Celebrity Girl filly on Wednesday.

“She’s a quality filly by a champion sire from a Group One winning mare,” Wallace said. “She’s got a good depth of pedigree and a lovely type.”

“She’s got a great head on her, easy movement – she has a lot of quality.”

The success of the first season sires continued on Friday when a smashing colt by Smart Missile from Negotiate sold for $700,000 from the Arrowfield Stud draft to Hawkes Racing.

“He just looked a real athlete,” co-trainer John Hawkes said. “Smart Missile was a very good horse – if he had have won the Slipper you’d probably be paying more for him.”

“We loved him – he’s just an athlete. He was out pick of the sale.”

“I want a runner in the race next year,” McEvoy noted. “I thought this was the horse. I loved his temperament and loved his rhythm and athleticism.”

Magic Millions Managing Director Vin Cox said he was delighted with the way the sale was tracking and was also pleased to see the strong international presence lead to a seven figure sale.

“The China Horse Club outbidding Spendthrift Farm of Kentucky proving that the weaker Australian dollar has had a massive impact on the upper level of the sale.”

“It’s just fantastic,” Cox added. “We’re sitting on a gross of just over $75 million – the gross is virtually the same as what we closed out on Saturday night last year – so we’ve got a full session (to come) for free.”

Champion trainer Gai Waterhouse is the leading buyer at the sale by both lots purchased (18) and total spend ($4,005,000). Second on the leading buyers list is the James Harron Bloodstock & Snowden Racing partnership with a spend of $3,615,000.

The view the latest results and to make an offer on a passed in lot click here. And to view a video summary of Friday’s third day of the sale click here.

The fourth day of the Gold Coast Yearling Sale will be held from 6pm (Qld time) on Saturday following the running of the $4.7 million Magic Millions raceday at the Gold Coast Turf Club.