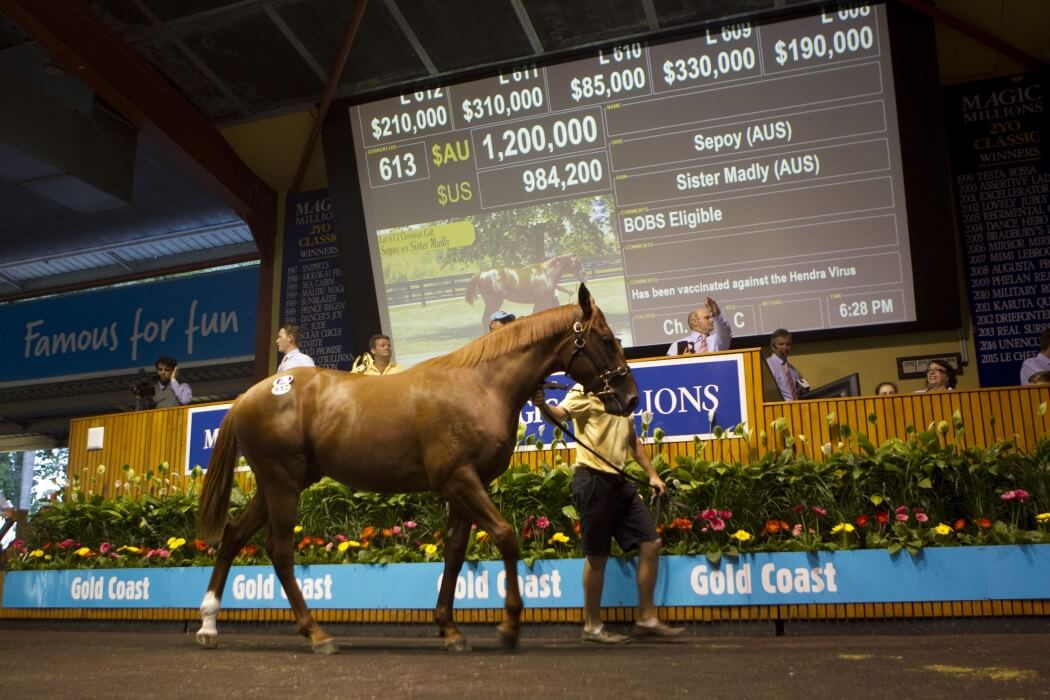 A stunning colt by Sepoy has topped the Magic Millions Gold Coast Yearling Sale and in doing so set an Australian record when knocked down for $1.2 million on Saturday night.

The first foal of former outstanding racemare Sister Madly, the colt was presented at the sale by Segenhoe Stud and after a fierce bidding battle was purchased by the US based Spendthrift Farm. He will head to the stables of Hawkes Racing.

The Segenhoe team purchased Sister Madly from the Magic Millions National Broodmare Sale as a stud prospect for $1 million. She was a group two winner and group one placed, ironically to Sepoy, for her new connections before heading to stud.

Her first foal had always been a stand out and on Saturday night he proved it with Spendthrift Farm outlasting Hong Kong’s George Moore to set a new record price for a first season sire representative sold at auction in the country.

“The number one is always physique,” Spendthrift’s Ned Toffey said of the Sepoy colt. “He’s a classy physical – just a classy looking horse.”

“He has a great walk and looks the part. He looks to us like a solid Australian horse and of course there was enough page there.”

Danny Bougoure made his presence felt when he went to $800,000 to secure the Exceed and Excel-Speedy Rossa filly from Amarina Farm.

“Really liked the filly,” Bougoure said. “We thought she was probably one of the better fillies in the sale.”

“The cross has worked well – Exceed and Excel-Testa Rossa. We had to set our sights a little high but we bought her.”

Warren, who counts as a client Her Majesty The Queen, said he and his partners were impressed with the quality of the colt.

“We did not want to get beaten as he was a very important colt and we put a team together to try and bank him as I thought he was the colt of the sale.”

Champion Melbourne trainer Peter Moody was also in the thick of the action and it wasn’t a surprise he purchased a Snitzel colt from Song of the Sun from the family of Black Caviar for $775.000.

“He’s a lovely colt and we know the family well as you know,” Moody said. “I traditionally don’t buy big horses – he’s quite a big horse – but I’ve only seen two in the family that move like that and it’s not hard to work out which two they were.”

When the final lot passed through the ring late tonight the sale gross had rounded out at over $92 million with an average price of over $170,000. The clearance rate was an extremely lofty 86 per cent.

“It was just a spectacular evening tonight,” Cox noted. “We averaged about $200,000 tonight and cleared around 90 per cent.”

“$1.2 million for a colt by Sepoy from Sister Madly – a mare we sold a few years ago for a million dollars – so it’s great to see that they had the faith in us to bright this colt back here to sell it and to get rewarded so handsomely for such a lovely horse.”

“What the figures show is that people that bring their top quality horses here will get the top money which we’re very happy about.”

“Apart from anything else it proves that Magic Millions, no matter what sale we’re running, can provide the biggest and best international buying bench and domestic buying bench of any sales company in Australia.”

To view the Day 1-4 sale results or to make an offer on a passed in lot click here. And to view a video review of Saturday night’s session click here.

Book 2 of the Gold Coast Yearling Sale will be held from 11am (Qld time) on Sunday with a quality line up of lots to go under the hammer.