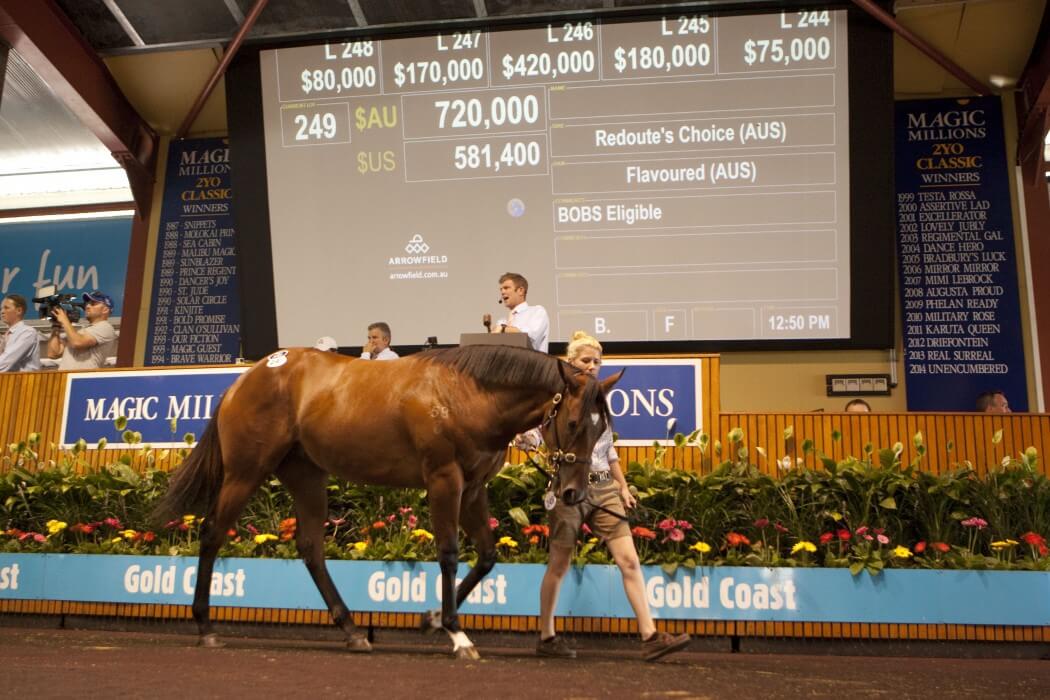 The pair of youngsters, a colt and a filly, both sold for $720,000 and helped push the cumulative sale gross to over $50 million.

Lot 249, a three quarter sister to Magic Millions Guineas fancy Aerobar, was the first of the pair to share top honours when she sold to Rick Worthington.

Presented by Arrowfield Stud the filly is the second living foal of a three time winning Hussonet sister to the stakes winner Ego’s Good.

“Whenever and wherever we buy a yearling and whether it be a colt or a filly it must be an athlete as you can’t train a pedigree page,” Worthington said.

“The fact that this filly has a great pedigree just increases her value of course. You’re buying an athlete, but if she can run there’s great residual there.”

Later in the day James Harron in partnership with American based buyer John Moynihan went to $720,000 to secure the day’s equal top selling colt.

The colt, catalogued as lot 359, was from the group performed, grand producing Quest for Fame mare Kidman and was presented by Newhaven Park.

The good looking colt is a three quarter brother to the outstanding Singapore based gallopers Zac Spirit and Zac Influence.

“We loved the horse – arguably he was the best bred horse of the sale,” Moynihan said. “If he runs like he looks then the sky is the limit.”

“He could be a stallion – we’re excited.”

Magic Millions Managing Director Vin Cox said he was delighted with the figures returned for the sale after two days.

“Today’s just been an amazing day, it really has,” Cox said. “It’s been amongst the strongest yearling sales that I’ve been involved with in over 24 years in the business.”

“There’s some star lots to come over the next couple of days so we may see some more fireworks yet.”

“While many horses have sold beyond expectations there’s still some great value on offer and prospective buyers will get some great opportunities through the remainder of the sale,” he added.

With strong results on Day Two, Arrowfield Stud’s champion sire Redoute’s Choice assumed his place at the top of the sire standings when ranked by average. His 16 lots sold so far have averaged $388,438. Fastnet Rock is second on the table at $320,938 while Sepoy leads the first season sires and is third overall with an average of $303,333.

The view the latest results and to make an offer on a passed in lot click here. And to view a video summary of Thursday’s second day of the sale click here.

The third day of the Gold Coast Yearling Sale will be held from 11am (Qld time) on Friday.