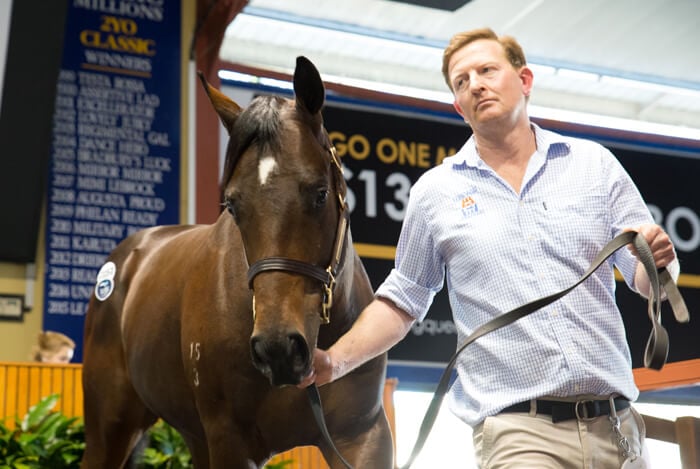 A cracking colt by exciting young sire Foxwedge has topped the Magic Millions National Yearling Sale after selling for $340,000 on the third and final day on the Gold Coast today.

Presented at the sale by Eliza Park International, as agent for the Heinrich Bloodstock Unreserved Dispersal Sale, the colt was purchased by the powerful Hawkes Racing operation after a spirited trans-Tasman bidding battle.

The colt is the fifth foal of the winning Fantastic Light mare Ekleel – a half sister to three stakes winners including South African Group One winner Ertijaal.

He is from the first crop of exciting young Fastnet Rock sire Foxwedge – a winner of five races including the Group One William Reid Stakes at Moonee Valley.

“He really stood out,” John Hawkes said after winning the bidding war on the youngster. “He’s got a great attitude and is extremely athletic.”

“He’s a great individual with a nice head and good bone. He will make a nice horse.”

“I’ve got a few Foxwedges now,” Hawkes added. “I’ve been impressed with his first crop and look forward to seeing them race.”

The top selling Foxwedge colt was one of eight yearlings to sell for six figure prices during a solid day’s selling.

That colt is the second foal of an unraced Zabeel half sister to Valpolicella – the group winning dam of stakes winners Vavasour and Vilanova.

A Singapore client purchased the third top seller, the Sepoy-Candy Vale half brother to stakes performer Candy Stripes, for $170,000 from the draft of Newhaven Park.

Another of the feature sellers on the day was Tarcoola Stud’s Sebring-Brilliant Jewel colt (Lot 1970) who was snapped up by Buffering’s buyer Paul Willetts for $150,000.

The sale rounded out with 428 lots sold at an average price of $26,151, boasting a gross of $11,192,800 – up on last year’s sale which was conducted in a different format. The clearance rate and average rose over the sale and rounded out at 75 per cent.

“The vendors that brought good horses were well rewarded and at the end of the day that is the sign of a good sale.”

To view the results of the sale and to make an offer on a passed in lot click here.

The National Sale selling extravaganza will be completed tomorrow when the National Racehorse Sale is held from 10am with a quality line up catalogued.

For more information and to view the online catalogue for the National Racehorse Sale click here.