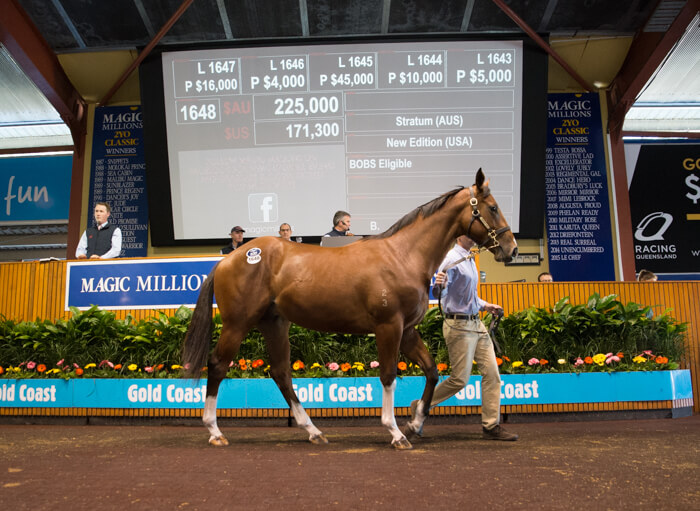 A colt by leading sire Stratum topped the first day of the Magic Millions National Yearling Sale on the Gold Coast today.

Leading Hong Kong based bloodstock agent George Moore went to $225,000 to secure the cracking individual from the draft of Yarraman Park Stud.

Presented as lot 1648, the colt is the fourth foal of the American stakes winning and Group Two placed Stormy Atlantic mare New Edition.

New Edition won four races and earned over $269,000 before retiring to stud where she has produced two international winners from two runners to date. She is a half sister to last year’s stakes winner Red Sashay and the stakes placegetter Shamaal Nibras.

The Stratum colt will be given his chance to become a star on the track with a career in the stables of champion Hong Kong based trainer John Moore after the purchased by his son Moore.

“We’ve had a lot of luck in the past with progeny by Stratum,” George Moore said. “He was the nicest type at the sale today.”

“He’s a cracking individual and we choose our horses completely on type. He moves so well and has great drive from behind.”

“He is from a nice international listed winning mare and I’m delighted to be able to buy the colt,” Moore added.

Exciting young sire I Am Invincible continued to make news with the second and third top sellers of the day.

Lot 1699, the bay colt from Prinny’s Girl presented by Eliza Park International on behalf of the Heinrich Bloodstock Dispersal Sale, was purchased by Laurel Oak Bloodstock for $160,000.

The colt is a half brother to promising Singapore galloper Dragon Highness and hails from the family of Doomben Cup winner Mr Bureaucat and fellow group winners All Black Gold and So Wotif.

The other I Am Invincible youngster to impress was Lot 1702, the bay colt by Pure Pleasure offered by Ambergate Farm, as agent for Middlebrook Thoroughbreds.

That colt is the first foal of the Foreplay mare Pure Pleasure, a half sister to stakes winners Stormcat Academy and Facile Tigre and he was purchased by Singapore’s Nova Bloodstock for $130,000.

Darby Racing was an active buyer with three purchases including the Beneteau full sister to Lady Jivago and the Snitzel-Kirovskaya filly. Both were purchased from the Arrowfield Stud draft for $90,000.

“As predicted being an end of season sale the market is very selective,” Magic Millions Managing Director Vin Cox said.

“As always quality is attracting strong interest with competitive bidding all round.”

“We have two more days of yearlings and there’s no better place to be now than in the glorious weather of the Gold Coast.”

To view the results of today’s sale and to make an offer on a passed in lot click here.

Day Two of the Magic Millions National Yearling Sale will be held from 10am tomorrow (Wednesday).