Quality gallopers Unencumbered and Sweet Idea will head to the Gold Coast for million dollar events after winning the feature races on Magic Millions raceday at Wyong today.

Unencumbered notched win three from four starts when he was too strong for his rivals in the listed $200,000 Wyong Magic Millions 2YO Classic (1000m).

Sent out the second favourite, Unencumbered sat off the leaders before coming with a strong sprint in the straight to win impressively for Nathan Berry and Bjorn Baker.

Provided the exciting youngster pulls up well and pleases connections he will be headed north to contest Queensland’s richest race, the $2 million Jeep Magic Millions 2YO Classic on January 11.

“He’s pretty straight forward because he’s just got a fantastic attitude and not many horses have as good an attitude as him,” winning trainer Bjorn Baker said.

The colt was purchased for $70,000 from January’s Magic Millions Gold Coast Yearling Sale from the Newhaven Park draft.

By former Magic Millions 2YO Classic winner Testa Rossa, Unencumbered is from a stakes winning daughter of More than Ready, sire of multiple Classic winners.

That mare is Blizzardly, a Magic Millions graduate herelf, who won the listed Keith Mackay Handicap and placegetter in a Magic Night Stakes and Tommy Smith Slipper as a two-year-old.

Unencumbered is already the winner of over $267,000 and that figure will sky rocket if he is one of the quickest two-year-olds at the Gold Coast on January 11.

Sent out the odds on favourite at her first start since a bleeding ban, Sweet Idea showed speed and then great fight to hold out proven stakes performer Weinholt to win by a long neck.

“I think she is one of those fillies that is never ging to make it look easy,” Waterhouse’s foreman Mark Newnham said. “But she loves a challenge and she puts her head out when it counts.”

“The best part today was the last part and she can put herself right on the speed and that is an advantage at the Gold Coast.”

Newnham said Waterhouse would almost certainly send the filly straight to Queensland and Sweet Idea’s next run would come in the million dollar feature.

Sweet Idea, a daughter of former Magic Millions graduate and 2YO Classic placegetter Snitzel, ran second to Real Surreal in January’s Classic and connections are hoping she can go one better this time around.

A half sister to the group performed Singapore galloper Rush, Sweet Idea is a daughter of the Adrian Knox Stakes placegetter Flidais, a daughter of Timber Country.

A daughter of multiple Group One winner Electronic, Flidais is represented at the 2014 Gold Coast Yearling Sale with a full sister to Sweet Idea in the Arrowfield Stud draft. 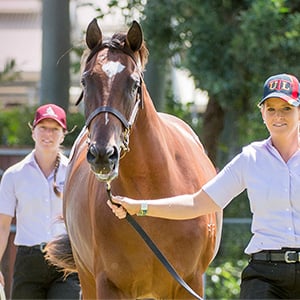