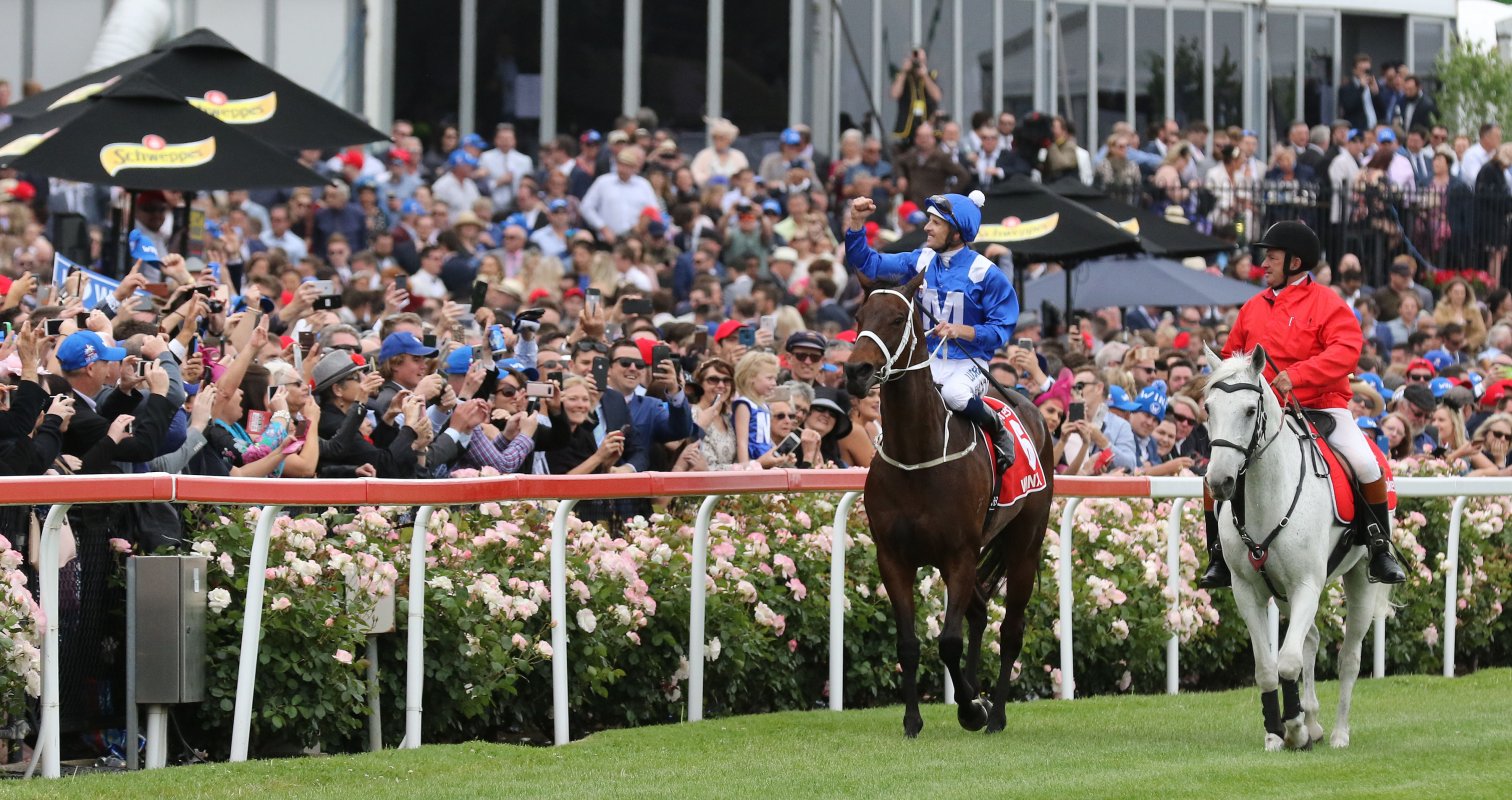 It was a moment to savour. An occasion the crowd of over 38,000 will never forget. The day our greatest racehorse created history…. again.Winx was breathtaking in winning a fourth consecutive WS Cox Plate at Moonee Valley on Saturday, a performance that elevated her to racing immortality.In the history of the Southern Hemisphere’s best weight-for-age race only one horse had won it three times – the incredible Kingston Town. That was until Winx.Having broken the track record in 2015, setting the biggest winning margin in 2016 and breaking the track record again 2017, Winx was sent out a hot favourite to make more history in 2018. And the queen of the turf didn’t let us down! In winning, Winx extended her winning streak to 29, her world record Group One haul ticked to 22 and she became the first horse in the world to win 10 consecutive Group One races.A $230,000 Gold Coast Yearling Sale purchase for Magic Bloodstock, Winx has earned her owners Peter Tighe, Richard Treweeke and Debbie Kepitis and their families a record $22.9 million. Winx, by Street Cry and from the Magic Millions National Broodmare Sale buy Vegas Showgirl, was bred by the Camilleri family of Fairway Thoroughbreds and sold at the Gold Coast in 2013 through the draft of Coolmore Stud.While Winx was the star act on the day, the stable wound up with a feature race double with Gold Coast Yearling Sale buys thanks to the impressive win of Charge.A son of Zoustar, Charge fought strongly over the concluding stages to hold out his rivals and win the Group Three Red Anchor Stakes.Purchased by Guy Mulcaster and Waller from Turangga Farm at the 2017 Gold Coast Yearling Sale, Charge is one of four winners from the General Nediym mare Queen of the Falls – a daughter of Niagara Falls and half sister to Elite Falls.

Top Tasmanian horseman Adam Trinder celebrated the biggest win of his career when outstanding filly Mystic Journey won the Group Two Moonee Valley Fillies Classic last Saturday.A former accomplished jockey, Trinder is now making his name as one of the Apple Isle’s leading horsemen and in Mystic Journey he’s found the horse to take him to the next level.Mystic Journey, who has developed from a juvenile listed win in her home state to a Group Two triumph on the most important raceday in modern day Australian history, will be sent for a break with the autumn in mind.The Armidale Stud graduate of the 2017 Tasmanian Yearling Sale was purchased for just $11,000 by owner Wayne Roser, a long time client and close friend of Trinder.A winner of six of her nine starts, including three at stakes level, Mystic Journey has now earned over $317,000.Trinder resisted the temptation to send Mystic Journey to tomorrow’s Group One Empire Rose Stakes hoping more rich rewards were in store in 2019.It looks like more trips on the Spirit of Tasmania are in store for the filly. She is trained only minutes from the Devonport ferry terminal and handles the approximate 10 hour boat trip well according to Trinder.Mystic Journey’s win was the second at Group Two level for accomplished jockey Anthony Darmanin. His other biggest win came in last year’s Linlithgow Stakes at Flemington aboard Gold Coast Yearling Sale buy Illustrious Lad.

Shoko All the Way for Sadler and Morgan

His name may have been in the book but for Tesio Stakes winning trainer John Sadler the success of Shoko in the Group Three feature was all down to Peter Morgan.Morgan, who had trained the Sebring mare since her purchase from the 2015 Gold Coast Yearling Sale, was in the winner’s stall to celebrate with Sadler and connections following Shoko breakthrough success.Sadler has just taken over the training of a number of Morgan’s gallopers after he decided to scale back his operation with news the property he was preparing his horses was to be sold.The Caulfield based Sadler praised Morgan for his handling of Shoko and sending her to his stable in peak condition.Shoko was impressive on Saturday, beating her seasoned rivals at just her sixth lifetime start. The Tesio was her third win.The five-year-old has already won back half of her purchase price and her residual value has soared with her first group win adding to what is an outstanding pedigree.A graduate of Fig Tree Thoroughbreds purchased by Dean Hawthorne and Gary Mudgway, Shoko is a half sister to Magic Millions 2YO Classic winner Mimi Lebrock as well as this year’s Grand Prix Stakes winner and Queensland Derby runner-up Heavenly Thought. Sircconi, who runs in tomorrow’s Group One Cantala Stakes at Flemington, is another to join Sadler in recent times from Morgan. The National Weanling Sale buy from Lyndhurst Stud Farm is a last start Group Three winner.

Flemington’s famous four day Melbourne Cup Carnival commences tomorrow with a star studded line up of runners set for the traditional Derby Day card.The nine races all run at group level include four Group Ones and it is the number one day in Australia for the classic generation of gallopers to shine.With the $2 million Victoria Derby (2500m) and $1 million Coolmore Stud Stakes (1200m) among the Group Ones on the day the three-year-olds can also contest the $200,000 Carbine Club Stakes (1600m).Perhaps the most intriguing three-year-old to race on Saturday at Melbourne’s most famous track is in another race – the half million dollar Group One Empire Rose Stakes (1600m).Her name is Amphitrite and she is the current $5 favourite with BetEasy. Prepared by master horseman Darren Weir, Amphitrite is aiming for five straight wins and cap what has been a memorable campaign for connections.The Sebring filly has come a long way in a short time. A $50,000 Adelaide Yearling Sale purchase, Amphitrite won her first race, a 1200 metre maiden at Sale in September – it was some performance.She made the step to midweek grade at Flemington with a soft win over 1420 metres before she backed up a week and a half later to win the Group Two Edward Manifold Stakes at the Empire Rose track and trip.To further show her class and untapped ability she then backed up seven days later and produced a stunning sprint to come from last and win the Group One Thousand Guineas at Caulfield. Her time wasn’t far off that set by The Autumn Sun in the Caulfield Guineas later in the afternoon on a firming track.A three-year-old filly against largely a field of older and seasoned mares, Amphitrite gets into the feature on 50 kilograms and will be ridden by Dean Yendall.Gold Coast Yearling Sale buys Zousain and Sunlight are amongst the early BetEasy favourites for the Coolmore Stud Stakes.Zousain has been freshened by Chris Waller after splitting The Autumn Sun and Graff in the Golden Rose in Sydney, while Sunlight is backing up after a luckless seventh against a crack field of open aged sprinters in last Friday night’s Manikato Stakes at the Valley.Lean Mean Machine, a stablemate to Zousain and the incomparable Winx, is among the other runners representing Magic Millions along with Perth Yearling Sale graduate Paquirri, a group winning juvenile.While homebreds Thinkin’ Big and Aramayo head betting in the blue riband Derby later in the day, punters could do worse than look at the SA bred and Gold Coast sold Mickey Blue Eyes.A $17 chance, Mickey Blue Eyes defied the pattern last start to work home stylishly in the Vase on Cox Plate Day. He never got a crack at his previous run in the Spring Champion Stakes.Mickey Blue Eyes is prepared by David and Ben Hayes and Tom Dabernig and with Regan Bayliss in the saddle he could be a runner to watch tomorrow.