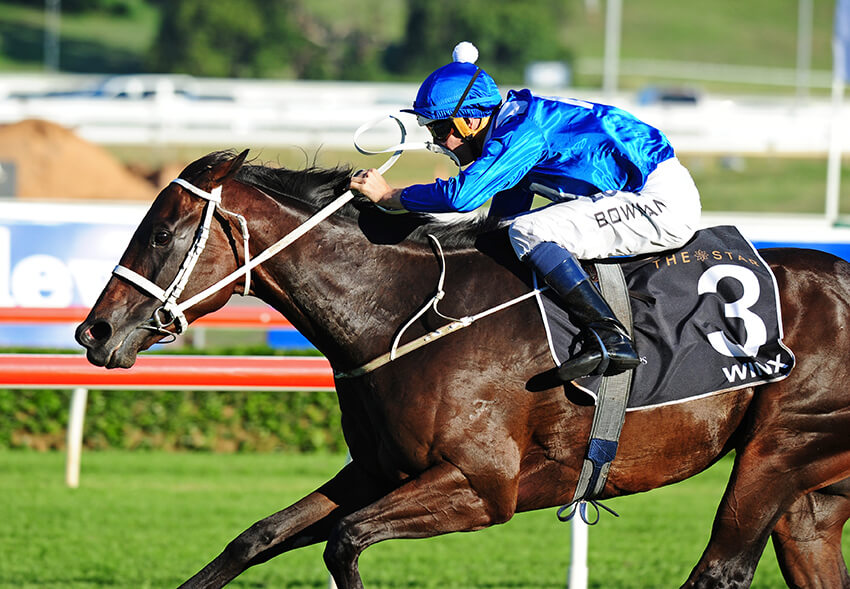 The crowd roared and punters cheered as Australia’s best racehorse Winx added yet another feature win to her growing resume in the $3 million Doncaster Mile (1600m) at Randwick today.

Despite getting well back in the field and being cramped for room, Winx was able to produce a powerhouse finish to beat her rivals headed by minor placegetters Happy Clapper and Azkadellia.

“I’ll call her a champion while I can speak,” an emotional winning trainer Chris Waller said.

“I wouldn’t say it’s a blur but it’s pretty unbelievable. I thought she was beaten at the half mile, let alone the 200 metre mark.”

“She must have an amazing will to win. It must be that. She is no more brilliant in work at home any other day of the week – I just don’t know!”

Waller said he would wait and see “how much today takes out of her” before deciding whether she would back up in the Queen Elizabeth Stakes (2000m) next week.

“We have to remember she’s a horse. You can’t expect everything. I’ve never asked her to recover quickly (before). I’ll just leave her a lone for three or four days.”

Champion jockey Hugh Bowman revealed to being concerned during the race that his mount could be beaten, but in the end she again proved much too good.

“I’m just really delighted for her,” Bowman said. “The build up was really something. I can really understand what other people with champion racehorses go through when they come to the races – the expectation is to win.”

“It’s an absolute honour to be involved with her and I’d just like to thank the owners and Chris Waller and all his staff. It’s just a privilege.”

“The track was quite worn and she wasn’t overly comfortable in it. The fact that she wasn’t comfortable and still produce that sort of finish is something that only a horse of champion qualities can do.”

“I’m just so proud of her. She is a once in a lifetime horse and I can’t believe I’m sitting on her,” Bowman added. “I’m elated!”

The three owners of Winx are enjoying the most incredible ride and one of those Peter Tighe said it was great to share the experience with an adoring public.

“She’s the most amazing horse to be involved with – for us and also for the people of Australia.”

“It’s going to be a big wait and see for us this week with Chris to see what will happen after that race – it could get a little more exciting,” Tighe added.

Winx, a daughter of former champion international sire Street Cry, was bred by the Camilleri family’s Fairway Thoroughbreds and is from the twice stakes winning Al Akbar mare Vegas Showgirl.

Earlier on today’s card her homebred Snitzel son El Divino showed dash and fight to share victory in the Group Three Kindergarten Stakes. They are her two named foals to date.

Winx herself was purchased by Magic Bloodstock from the draft of Coolmore Stud, as agent for Fairway Thoroughbreds, for $230,000 at the 2013 Magic Millions Gold Coast Yearling Sale.