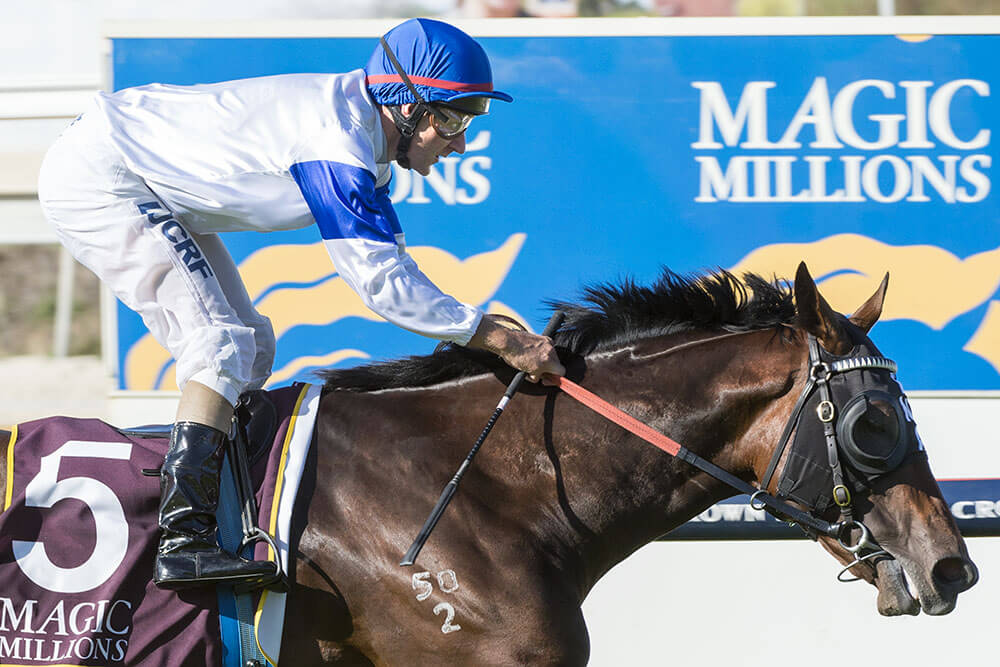 Lucky Street emerged as a leading contender for the Karrakatta Plate and gave his sale bound half brother a timely boost when he raced away to win Saturday’s $250,000 Magic Millions Perth 2YO Classic at Ascot.

A son of leading Western Australian based sire Oratorio, Lucky Street sat off a hot speed set by Chantski before steaming home over the concluding stages with an impressive turn of foot to win.

The colt, who was purchased for $75,000 from the Mungrup Stud draft at last year’s Magic Millions Perth Yearling Sale, raced clear to win by two and a half lengths from the fast finishing Light Up the Sky, while Dickey was another three parts of a length back in third place.

Lucky Street was sent out the favourite following a win in October and two impressive trial victories at Belmont in mid January and early February.

Trainer Trevor Andrews said the colt had always shown great ability and he knew he was on track for the Classic after beating his old stakes winning stablemate Palace Intruder in a recent gallop. Palace Intruder was second when beaten in a thrilling three way finish in stakes company earlier on Saturday’s card.

“He galloped with Palace Intruder on Tuesday morning and he absolutely played with him. He’s got a really big motor.”

“I loved him the sales. We put a great group of people together. It’s good to go to the sales and buy a nice horse and you break the product in and you trial it and you realise you’ve got something you wish for.”

“Magic Millions are great. They run us all over the state to look at these yearlings. After this result we can go to the sales with a bit of confidence.”

“He’s a beautiful colt. The Karrakatta and the Sires’ (Produce Stakes), I’m looking forward to those. You’ll probably leave him an entire now and he could cover a few mares at the end of the day.”

“Speed and turn of foot will win you races and he’s got plenty more wins in him,” Andrews added.

One of four good winners for the six time winning Umatilla mare Rumours, Lucky Street provided his sale bound half brother by Hala Bek with a great boost.

A member of the Mungrup Stud draft, the brown colt is catalogued as Lot 290 and he will go under the hammer on Wednesday at the Perth Yearling Sale at the Belmont Park Sales Complex.

Lucky Street made it three Magic Millions race wins for graduates of the Williamson family’s Mungrup Stud since Wednesday following Gold Busker’s win in the Brooklyn Park Magic Millions Tasmanian 2YO Classic and the win earlier on Saturday of Red Ora in the Magic Millions Perth 3YO Trophy.

Meanwhile, Red Ora will head to the paddock with his perfect race record in tact following a highly impressive win in Saturday’s $100,000 Magic Millions Perth 3YO Trophy.

One of three late entries for the race, Red Ora was sent out the odds on favourite after four wins from an many starts during a whirlwind preparation where he’s emerged as one of the most promising gallopers in the state.

The gelding was first seen in public in late November when he won a Belmont trial. He made a winning debut at Ascot on December 27. Since then he has raced on four more occasions and won the lot.

Trainer Dan Morton said the son of Due Sasso would head for a spell with his jubilant connections set to mothball their bright red jackets and caps which they wear proudly when their charge races.

He is raced by Mungrup Stud’s Gray Williamson along with school mates from Aquinas College – many of them first time racehorse owners.

Williamson said most joined as an owner hoping to watch the galloper race around the state and enjoy the social side of the industry. The group are yet to venture from Ascot where Red Ora has won all his five starts.

“It was a truly amazing day,” Williamson said while his next group of yearlings were paraded at the Belmont Park Sales Complex on Sunday.

“I couldn’t have possibly had such a great day. To have sold the Tasmanian Magic Millions 2YO winner on Wednesday night and both of yesterday’s winners here in Perth is something we’re very proud of.”

The 2015 Magic Millions Perth Yearling Sale will be held on Tuesday and Wednesday.