Miss Marx sent her new connections into jubilant celebrations at Caulfield on Sunday when she scored a breakthrough stakes success in the listed Testa Rossa Stakes (1200m).

In leading home a Magic Millions trifecta result, Miss Marx emerged as one of the early star buys from June’s National Broodmare Sale at the Gold Coast.

The Anabaa mare, having already won three Sydney races for the John O’Shea stable, was offered at the auction and purchased for $110,000. She is now in the care of accomplished trainer David Vandyke.

The run was the second since her recent purchase. First up in the new colours she chased home the outstanding mare More Joyous in the Sheraco Stakes in Sydney.

This time around the Warwick Farm horseman confessed to giving up any chance of winning approaching the turn. The quality performer was well off the speed on a day in which the track suited those near the rail and close to the speed.

“I didn’t give her a hope at the 600 (metre mark) I thought she’d be out there leading or eye balling the leader,” Vandyke said.

“It was a tough win. She was six or seven deep most of the way and I couldn’t believe it when she got there.”

Vandyke thanked the new connections of Miss Marx for giving him the opportunity after purchasing her a tried and proven performer in Queensland just three months earlier.

“She went through a tried horse sale and the owners asked me to train her and the rest is history,” Vandyke noted.

“We’ve been second in a stakes race behind More Joyous and now we’ve won the Testa Rossa (Stakes).”

Vandkye said Miss Marx would almost certainly stay in Melbourne for at least another black type event over the Melbourne Spring Carnival.

Miss Marx was originally purchased by John O’Shea for $150,000 from the Baerami Thoroughbreds draft at the 2009 Magic Millions Gold Coast Yearling Sale. She was bred by John Muir of Milburn Creek Thoroughbred Stud.

After three Sydney wins and numerous placings she was sold for $110,000 at June’s Magic Millions National Broodmare Sale where she was purchased from the Kitchwin Hills draft by Ian Smith’s Edinburgh Park.

The five-year-old mare is now a valuable breeding prospect being a stakes winning daughter of leading international Danzig sire Anabaa.

Her dam, the Bite the Bullet mare Daijobo, won the listed Nivison Handicap and is a full sister to the stakes winner Let’s Compromise.

In breaking through for the first time at black type level, Miss Marx became the 83rd individual stakes winner for the July Cup winning sire Anabaa. 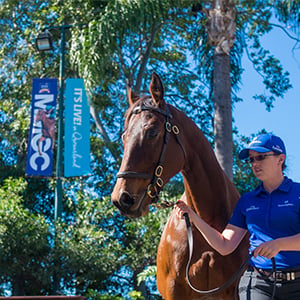