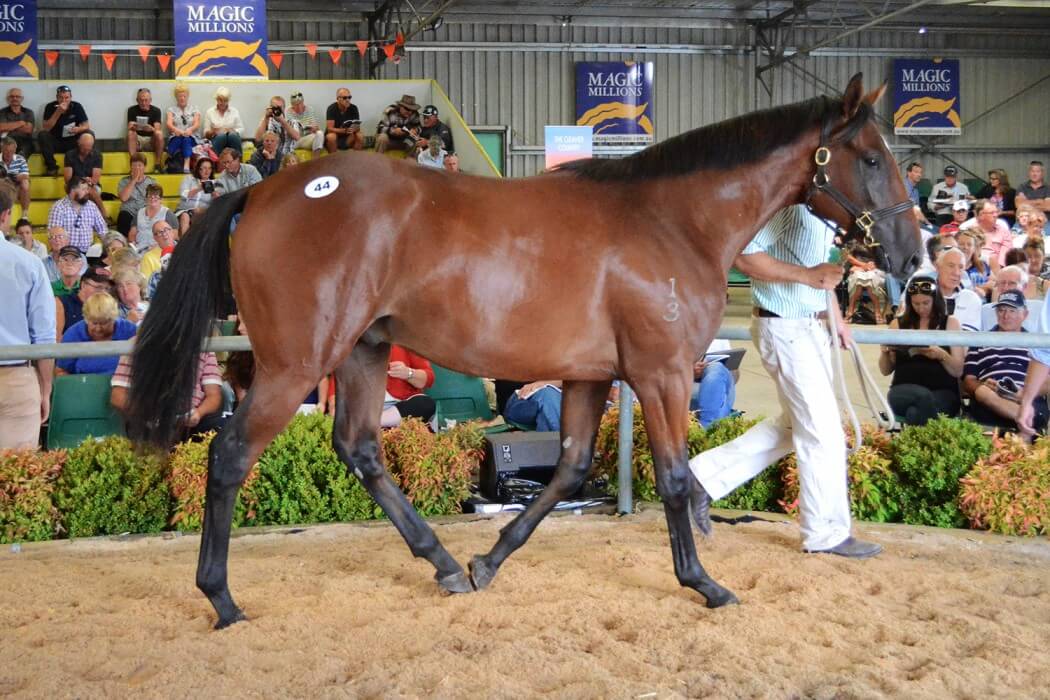 Offered by Armidale Stud on behalf of his breeders, the colt catalogued as Lot 44 sold for a record price of $100,000.

The bay colt is the last Savoire Vivre yearling to be sold at auction and is from the stakes winning El Moxie mare Private Nip and is a half brother to fellow Tasmanian stakes winner Twenty Grand.

“He looks a real tough horse like his three quarter brother The Cleaner,” Slade said. “He will head to the John McArdle stable, so he’s in great hands.”

“Hopefully we can come back to Tasmania with him and win a race like the Launceston Cup,” Slade added.

The second top priced lot for the day came with the second last lot in the ring – Lot 120 – the Zoffany-Genuine Blonde colt, also from Armidale Stud.

A half brother to the stakes winner Radha Rani and Monday’s Hobart Cup runner-up Genuine Lad, the flashy colt was purchased by Victoria’s Scott Brown for $70,000 after a spirited bidding battle with at least four parties.

The top priced filly of the day was the Sebring-Cunning Lass filly from Armidale Stud, as agent. The first foal of a lightly raced Danzero mare, she was purchased by leading Victorian trainer Darren Weir for $60,000.

Tasracing Chief Executive Officer Dr Eliot Forbes was impressed with today’s sale which boasted not only a record price, but also a record average price and record sale gross.

“This is a huge boost of confidence in the local industry and the quality of the Tasmanian product,” Dr Forbes noted.

“Having a record top price and a record average speaks volumes for the Tasmanian Racing industry. To that end we’d like to thank Tasracing’s Dr Elliot Forbes and David Manshanden and their team. The relationship formed between Magic Millions and Tasracing has gone from strength to strength.”

“As good as the result was – we think we can improve on it in the years to come,” Cox added.

To view the results and to make an offer on a passed in lot click here.

The Magic Millions focus now switches to Perth with Saturday’s feature raceday followed by the sales next Tuesday and Wednesday at the Belmont Park Sales Complex. The view that online catalogue click here.