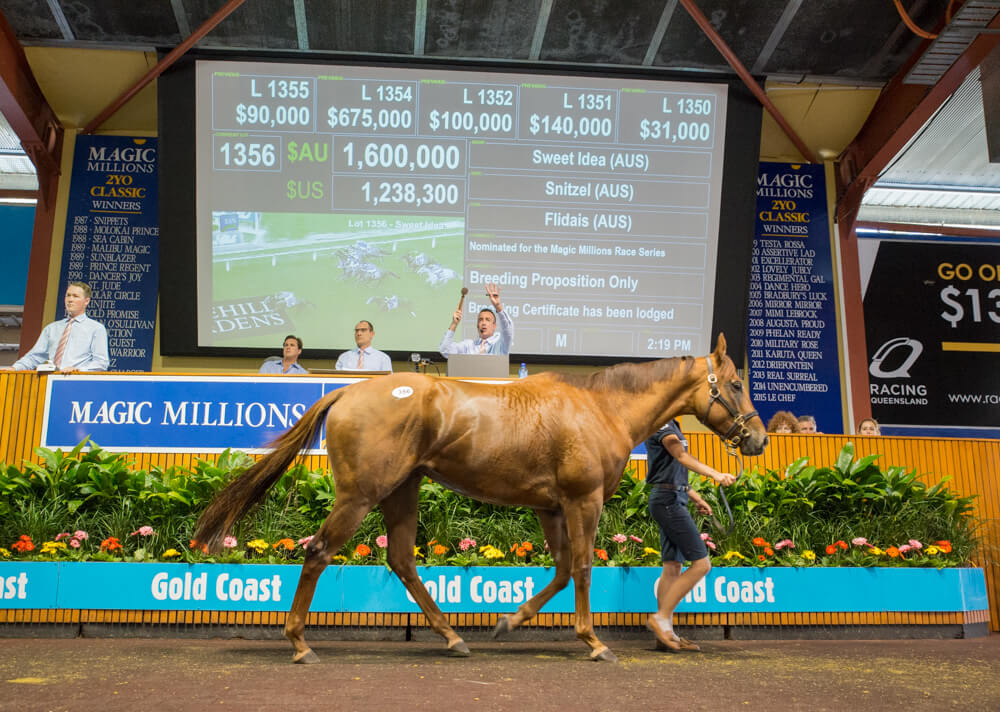 Sweet Idea topped Day One of the Magic Millions National Broodmare Sale on the Gold Coast on a day in which three lots sold for over $1 million.

Presented at the auction by Widden Stud as agent for her connections, Sweet Idea was purchased by her former part owner Nick Vass for $1.6 million.

The other stars of the day included Villa Verde who made the early running when knocked down to James Bester for $1.1 million and former star New Zealand galloper Fix who was sold to Tom Magnier for $1.25 million.

Sweet Idea, a graduate of the Gold Coast Yearling Sale, was retired soon after winning the Group One Galaxy in Sydney when an injury halted her campaign which was headed to the Brisbane Winter Carnival.

The former Gai Waterhouse prepared daughter of Snitzel attracted an opening bid of $1 million and it was Vass who held the bid when auctioneer Grant Burns dropped the hammer at $1.6 million.

“I’m delighted to be able to get her,” Vass said. “That was my limit by the way!”

Vass said no decision had been made yet as to which stallion would serve the Group One winner in her first season at stud.

Interestingly, like Sweet Idea and her sire Snitzel, all three stallions listed by Vass as options for the star mare – Pierro, Sebring and Dissident – are graduates of the Magic Millions Gold Coast Yearling Sale.

“She’s a lovely broodmare as you can see. She’ll hold a good foal,” Vass added. “Hopefully the first foal, the boys might buy back in – the Henderson boys – that would be good.”

Coolmore Stud’s Tom Magnier was an active buyer today and his top buy was the day’s second top seller, New Zealand group winner Fix – who was sold for $1.25 million from the draft of Newhaven Park.

“She’s one of the highlights of the week and we’ve delighted to have her,” he added.

The first million dollar seller of the day came when the gorgeous grey mare, Group Two winner Villa Verde, was sold to the $1.1 million bid of leading Sydney based bloodstock agent James Bester from the debut draft of Glenesk Thoroughbreds.

“She had an extraordinary physique,” Bester said. “And that’s just the type of two-year-old speed horse that they were looking for to send to Deep Field.”

“The idea was to buy her for Deep Field, to find a mare that had the precocity and the speed to get a stallion like that up and running early,” Bester added.

It’s no surprise the average is down from last year’s opener – when 10 mares sold for over one million and a star studded Teeley Dispersal draft averaged a staggering $404,000 helping return a Day One average of $205,810. Today’s average is impressive considering the 2013 National Broodmare opener averaged a tick under $85,000 – that’s a 50% increase on that auction.

“Comparing apples to apples we have to go back a couple of years as last year we have the Teeley Dispersal and that was just extraordinary.”

“We’re sitting on a turnover over $22.5 million compared to two years ago of $16 million. Again the National Sale is on the move – it’s standing right out there on its own and that’s great to be a part of.”

To view the results from the sale and to make an offer on a passed in lot click here. To view a video review of Day One of the National Broodmare Sale click here.

Day Two of the National Broodmare Sale will commence at 10am tomorrow.