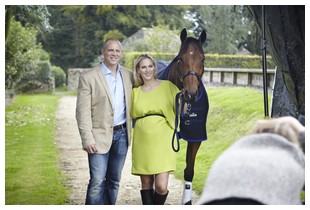 Zara Phillips MBE, team eventing silver medallist at the London 2012 Olympic Games and former European and World Champion, has been announced as Patron of Magic Millions Racing Women (MMRW) for 2014-2018. Her appointment will see her promote and champion the role played by women in the multi-faceted sport of thoroughbred horse-racing.

The appointment was a natural progression given Ms Phillips’ success as the inaugural MMRW Ambassador in January this year (2013), when she visited Australia for the weeklong Jeep Magic Millions Carnival and won the hearts of the Australian public. Magic Millions is thrilled to be working with Ms Phillips for years to come.

The Magic Millions Racing Women initiative is the world’s first women’s-only incentive bonus of AUD$500,000, distributed between the top four all-female owned or leased horses in finishing order in the Jeep Magic Millions 2YO Classic. The MMRW incentive bonus was made available for the first time by Magic Millions owners Katie Page-Harvey and Gerry Harvey at the 2013 Carnival.

Speaking from her stables in the United Kingdom, Ms Phillips said how honoured she is to be appointed Patron of Magic Millions Racing Women.

“I am passionate about what the Racing Women initiative is seeking to achieve both in Australia and internationally. This initiative focuses on rewarding and recognising the vital role women play in the sport, as well as attracting newcomers. It is an honour to take on the role of Patron of Magic Millions Racing Women, as it is a cause I am naturally committed to from personal experience. I have my mother and Grandmother to thank for my life-long commitment to the sport of horses.

“I don’t think anyone imagined the success of the initiative. As I was watching at the Gold Coast Turf Club, Racing Women eligible horses finished first, third and fourth. It was an incredible feat for year one. The female connections of Real Surreal collected AUD$1,465,000 for winning the race and the bonus incentive. It made history – this was the most prize money ever won by a horse in Queensland.

“Due to the imminent arrival of our first child, I sadly won’t be attending the 2014 Jeep Magic Millions Carnival, but I look forward to returning to Australia to spend some more time on the stunning Gold Coast in 2015,” Ms Phillips said.

Magic Millions co-owner Ms Page-Harvey said, “We are delighted that Zara has agreed to become Patron of Magic Millions Racing Women. We feel privileged to be working with such an internationally accomplished horsewoman. She was the ideal spokesperson in our inaugural year, embodying the role women play in the equine industry, whilst simultaneously raising awareness for this world-first initiative.

“Zara’s insight into women’s racing communities and business interests beyond Australia have been beneficial to Magic Millions Racing Women and the industry generally. The success of Black Caviar at Ascot, for example, illustrates that the influence of the Australian horse-racing industry extends well beyond our geographical boundaries.

“We continue to be thrilled by the numerous enquiries from other countries on how they can be involved with Magic Millions Racing Women and we’re positive that the momentum nationally and internationally will only continue,” Ms Page-Harvey said.

“The Jeep Magic Millions Carnival and Race Day is a highly anticipated annual event on the Gold Coast calendar. To welcome Ms Phillip’s back as Patron for five years further highlights its reputation as a prestigious event on the world racing calendar,” said Minister Stuckey.

“As an internationally recognised equestrienne, Ms Phillips’ role as Patron will garner worldwide attention, showcasing the Gold Coast to a global audience.

“Tourism is a key pillar of the Queensland economy and the Government is proud to support this event through Tourism and Events Queensland as part of our goal to double annual overnight visitor expenditure from $15 billion to $30 billion by 2020.”

Ms Phillips spoke exclusively to The Australian Women’s Weekly from her stables at Gloucestershire in the UK about what it means to her to be Patron of Magic Millions Racing Women for the November edition, which appears on newsstands today and online at http://aww.ninemsn.com.au/news/inthemag/8743472/at-home-with-zara-phillips-and-mike-tindall