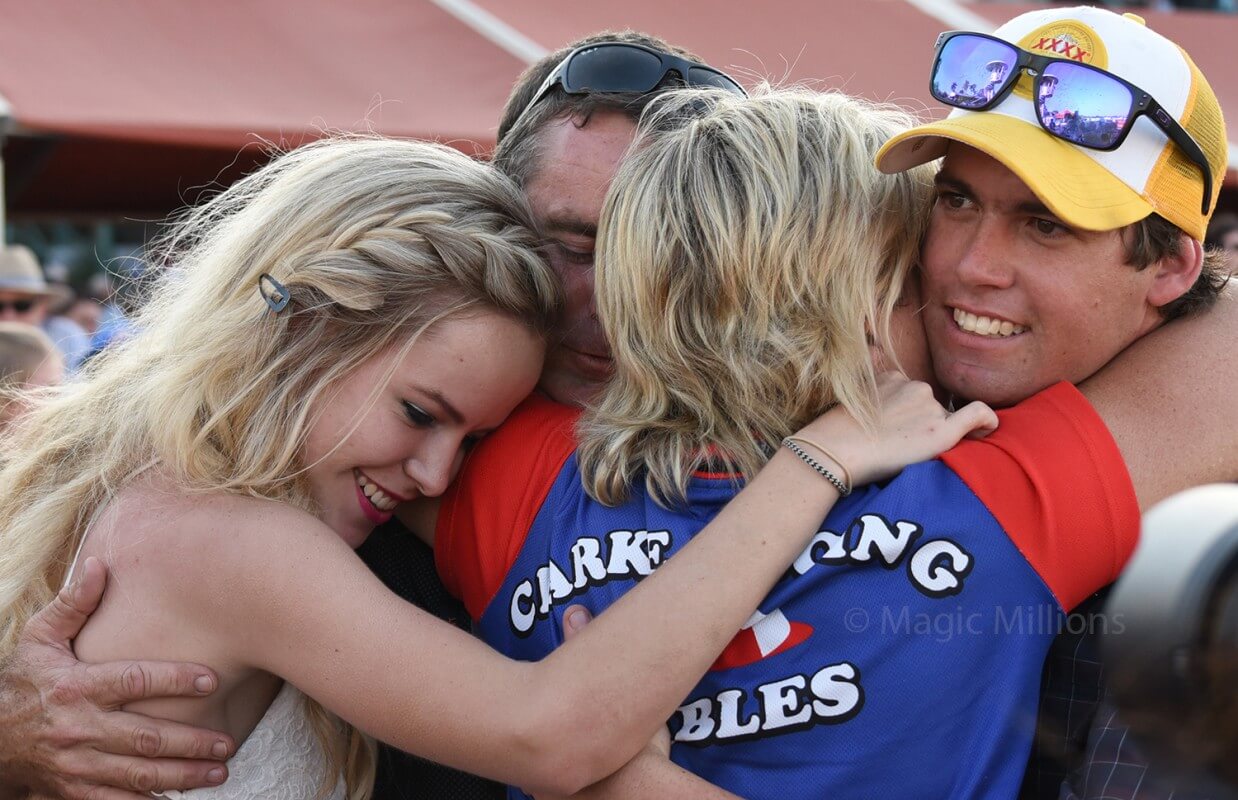 “I couldn’t watch the race live, I went out next to the horse stalls and listened to the race with Simone.”

Sharlene Clarke, wife of Darwin trainer Gary, describing how she listened to Monday’s Darwin Cup and learned the race and stable favourite Lightinthenite had scored a runaway victory.

Moments later Sharlene joined Gary and children Guy and Ella in an emotional embrace in the Fannie Bay mounting yard after capturing the Northern Territory’s richest and most famous race.

It was a spectacular performance from Lightinthenite. The son of Galileo was sent out the $3 favourite and after tracking the speed throughout he burst away from the field and despite being eased near the line still held a nine length margin over the field. The superlatives continued when it was announced the handsome chestnut had smashed the track record by a second.

While a breakthrough win in a hometown Cup is an emotional success at the best of times, the win on Monday meant much more for the state’s most winning stable.

Former country Queenslanders, the Clarke family has in recent seasons grown their stable to become one of the biggest and most powerful around. One part of that success was Simone Montgomerie.

Simone, the former South Aussie apprentice, around the same time was establishing herself as the top rider of the region. At the Metric Mile meeting in 2013 she clinched the Darwin Jockey Premiership with a win on the Clarke trained Warrego Melody.

No sooner had Simone reached the top of her riding game and was officially recorded as the Top End’s best, tragedy struck. On Darwin Cup Day, Montgomerie died following a fall in the Lightning Plate aboard a runner bred by her father Peter and in a race which was won by a horse raced by her mother Lee-anne.

Hearts broke around the country – from Simone’s home town of Streaky Bay, across South Australia and right around the Territory. Among those left to grieve was her then five-year-old daughter Kodah.

Simone’s racing family, the Clarkes were understandably distraught at the loss of a loving friend – someone who wasn’t just a rider, a jockey or an employee – someone they treated as a daughter, as a sister, as a best friend.

In the time since Simone’s passing the Clarkes along with the Montgomerie family have been able to continue to keep the spirit of Simone riding along with the stable in special ways – one of which was the establishment of “Simone’s Garden” at the front of the stables. It’s a beautiful tribute garden for Simone’s friends to be able to remember her contribution and love for the people and horses she worked with.

The Darwin Turf Club in association with race sponsors Wolf Blass, renamed the Lightning Plate to include the Montgomerie name to honour Simone and celebrate her life and achievements. It was run for the first time last year and won fittingly by a Clarke trained runner. A Montgomerie owned runner ran second.

O’Leary, a former “boss” of Simone when she was an apprentice, said the win was one of the most special he’d been involved with.

A couple of hours later it was the turn of Lightinthenite. A horse bred in the New South Wales town of Boorowa, sold as a weanling on the Gold Coast for $77,500 to an Irish based buyer to take centre stage.

He showed early ability in Sydney for John O’Shea – winning races there before reaching a career high when on Caulfield Cup Day he won a Coongy Handicap at Group Three level. He was a great flag bearer for the Champion Thoroughbreds team.

Fast forward a couple of years and Lightinthenite ended up in Darwin – in the ownership of some of the Northern Territory’s biggest racing names – Mick Burns, Brooke David, Justin Coleman, “Foxy” Robinson, Viv Oldfield, Sharlene Clarke as well as Chief Minister Adam Giles.

After a frustrating and rushed campaign last year when he finished second in the Cup, Lightinthenite proved he was on track for the 2015 Cup when he scored a track record breaking win in the Chief Minister’s Cup on July 11.

Kept fresh, he went into Cup Day in peak fitness and performed accordingly – scoring what seasoned Darwin patrons have described as the greatest Cup performance ever.

The performance alone would be enough to get the emotions high – but for the Clarke family the win meant so much more. That one was for Simone.