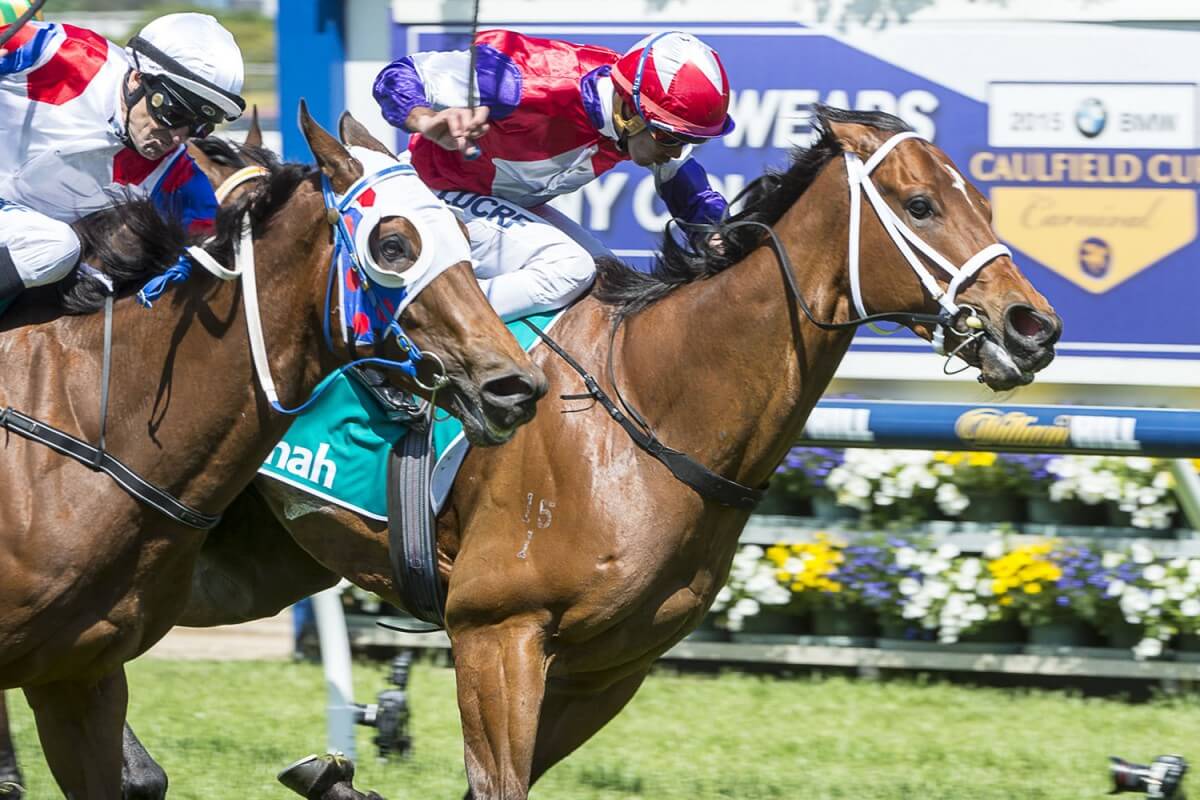 Caulfield hosted their annual Cup meeting and four graduates were successful – Eclair Choice, Stratum Star, Mahuta and Vezalay, while Dothraki added another feature win to his record when success in a stakes event in Sydney.

Bargain buy Eclair Choice had his connections cheering when he scored a thrilling dead heat success in the Group Two Caulfield Sprint (1000m).

The four-year-old gelding, who cost his owner Thomas Li of the Macau Jockey Club just $5,000 at the Magic Millions National Weanling Sale, was a stakes winner at three and today showed his future was bright when he hit the line locked together with proven group winner Lumosty.

Prepared in Adelaide by Phillip Stokes, Eclair Choice was ridden to victory by stable rider Dom Tourneur and his earnings are just shy of $300,000 already.

Incredibly it was the second straight year that the Caulfield Sprint provided a dead heat finish. Last year it was Miracles of Life and Bel Sprinter who couldn’t be split by the judge.

Eclair Choice, a graduate of Newhaven Park, is from an unraced Woodman daughter of Group Slipper heroine Burst – a winner of seven races and the champion juvenile of her year in Australia.

Stratum Star continued his outstanding spring form when he steam rolled his rivals in a classy victory in the Group Three Coongy Handicap (2000m) at Caulfield.

Winning trainer Darren Weir said the Group One Mackinnon Stakes would be next on the agenda for Stratum Star.

From 20 starts the gelding has notched five wins and 10 placings and his earnings have now raced past $760,000.

By former Golden Slipper winner Stratum, Stratum Star is from the city placed Pins mare Purely Spectacular – a half sister to Raid. As well as Stratum Star she is also the dam of recent group performer Serenade.

Mahuta emerged as one of the new stars of the all conquering Darren Weir stable when he scored a dominant on speed win in the listed Gothic Stakes (1400m) at Caulfield.

A runaway winner at his previous start in maiden grade at Kyneton, Mahuta showed great progression to head to town and a stakes race to win well.

Trainer Darren Weir said Mahuta would now most likely head to the Carbine Club Stakes at Flemington on Derby Day.

Mahuta was purchased for $35,000 from the draft of Redbank North at the 2014 Magic Millions Adelaide Yearling Sale.

A colt by Golden Slipper winner Flying Spur, Mahuta is the second stakes winner produced by his dam, the unraced Zabeel mare Vahine.

A three quarter sister to Group One winner Isolda (dam of G3 winner Bid Spotter), Vahine, the dam of Mahuta, is also the dam of the Chester Manifold Stakes winner Anlon (Stratum).

Quality mare Vezalay broke through for a valuable stakes success when she beat out a quality field of the fairer sex to win the listed Alinghi Stakes (1100m) at Caulfield.

Prepared by Leon and Troy Corstens, Vezalay had it three wins from 10 starts when she carried the colours of Spicer Thoroughbred to success.

A daughter of Shamardal, Vezalay was purchased for $180,000 from the Attunga Stud draft at the 2013 Magic Millions Gold Coast Yearling Sale.

Connections will eye off better class races in the future for Vezalay – suggesting she will be at her best next autumn.

Vezalay is one of five runners for the 100 per cent winner producer Tactfully – a stakes performed winner of five who is by Flying Spur. Tactfully is a sister to Roulettes and half sister to Royal Discretion. It is also the family of kiwi Group One winner Albany Reunion.

Dothraki showed he was in for another successful campaign when he resumed for a solid victory in the listed City Tattersalls Club Lightning (1100m) at Randwick.

The five-year-old gelded son of Mossman led home a quinella for the father-son training team of Peter and Paul Snowden when he beat out That’s a Good Idea by a neck.

Dothraki, a group winner at the Gold Coast two runs back, was purchased by the Triple Crown team for $45,000 from Gerry Harvey’s Baramul Stud at the 2012 Magic Millions National Yearling Sale. He’s now earned his connections over $680,000.

One of 31 stakes winners for his and Buffering’s sire Mossman, Dothraki is one of four winners for the winner Volantic – a Flying Spur half sister to Simonstad.