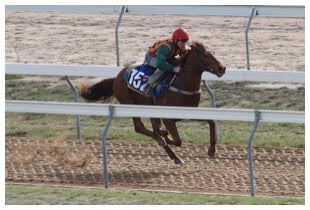 A colt by Wanted ran a Seymour breeze up record time of 10.05 seconds today in a great pointer for the upcoming Magic Millions Gold Coast 2YOs in Training Sale.

Catalogued as Lot 152, the colt was the quickest of seven exciting two-year-olds to breeze and be electronically timed over 200 metres this morning.

The chestnut is the seventh living foal of the Success Express mare Gal Express. Her five runners are all winners and include the stakes performer Timely Truce.

Another youngster to impress was the Foxwedge-Heigl colt from Nolen Racing who galloped stylishly and stopped the clock in 10.16 seconds.

The Foxwedge colt (Lot 162) is from a twice winning Bel Esprit half sister to Group One winner Rockabubble (dam of stakes winner Rock Magic) as well as the dam of Unpretentious.

Five of the seven lots to breeze today at Seymour ran times of 10.8 seconds or quicker.

“The track was presented in top fashion and the two-year-olds breezed accordingly.”

“Congratulations to vendors and their staff for presenting a first class group of youngsters,” Brown added.

Today follows the recent breeze up of two juveniles in Sydney (Lot 85 – Bernardini-Zabere colt at 10.7 secs and Lot 121 – Foxwedge-Coeur d’Amour filly at 10.62 secs). The vision for those breeze ups are now online – for the latest vision and times click here.

The focus now switches north with the Gold Coast Turf Club hosting a breeze up session from 9.30am on Monday with in excess of 150 lots to go through their paces.