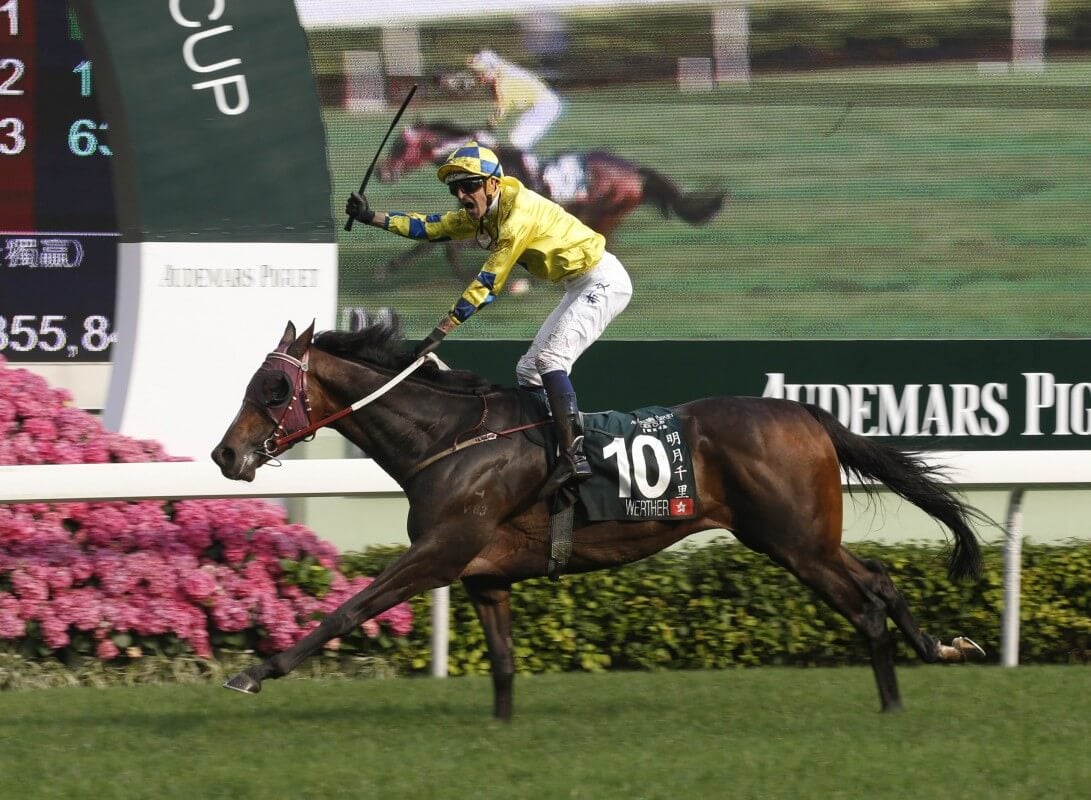 Outstanding galloper Werther has demoralised his rivals with a stunning win in Sunday’s Group One The Audemars Piguet QE II Cup (2000m) at Sha Tin.

Having his first run since winning the Hong Kong Derby, Werther was sensational – sitting off the speed before coming through near the fence for a stunning four and a half length win.

A son of Tavistock, Werther is the winner of three of his five runs in Hong Kong for champion trainer John Moore. He was second in the other two.

After winning the Derby and now QEII Cup, Moore said Werther would head to the Champions and Chater Cup in a month. He said he would talk to owner Johnson Chen about a possible trip to Melbourne for the Cox Plate.

Werther joined the Moore stable in Hong Kong after the former New Zealand based galloper was purchased by his brother Gary Moore in a deal brokered by Magic Millions Sales Director David Chester.

The talented galloper won a Group Two against the older horses at three in Brisbane and he was placed in both a Queensland and South Australian Derby.

Winning rider Hugh Bowman wasn’t surprised by the win of Werther in today’s feature, but he was shocked by the ease of the success.

“Today I allowed him to really relax throughout the race and we’ve seen the best of him,” Bowman said.

“I had a suspicion after the Derby we would see a better horse against better opposition but I certainly didn’t expect him to perform to the level he did this afternoon,” the champion Australian jockey added.

A son of Flying Spur and a graduate of Newhaven Park, Zac Spirit was the highlight on a big day for his trainer, former Australian based horseman Cliff Brown.

Zac Spirit, who is from the group performed Quest for Fame mare Kidman, was knocked down for $95,000 at the 2010 Magic Millions National Weanling Sale.

In Australia the Magic Millions success was highlighted by the stakes wins for Silent Sedition, Modern Wonder and Hopfgarten.

Silent Sedition (War Chant), a $45,000 Perth Yearling Sale purchase, booked her place in the field for the Group One Australasian Oaks with a stylish win in the Group Three Auraria Stakes (1800m) at Morphettville on Saturday.

Prepared by Andrew Noblet, Silent Sedition was able to ground down C’est Beau La Vie in the shadows of the post to win under Craig Williams.

Also at Morphettville exciting juvenile Modern Wonder made the perfect start to her career with a dashing success in the listed Dequetteville Stakes.

Prepared by the father/son training partnership of Leon and Troy Corstens, Modern Wonder proved much too good for her rivals, beating Motown Lil by two lengths.

A daughter of Snitzel, Modern Wonder was bred in South Australia and sold for $175,000 at last year’s Gold Coast Yearling Sale through the Mill Park draft.

Modern Wonder is a half sister to the talented three-year-old Cocoa Doll, a filly who later in the day was fourth in the listed Redelva Stakes for Phillip Stokes.

In winning Hopfgarten sent his earnings over half a million dollars – not bad considering he cost Paul Willetts just $26,000 at the 2012 National Yearling Sale from the draft of Enterprise Stud.