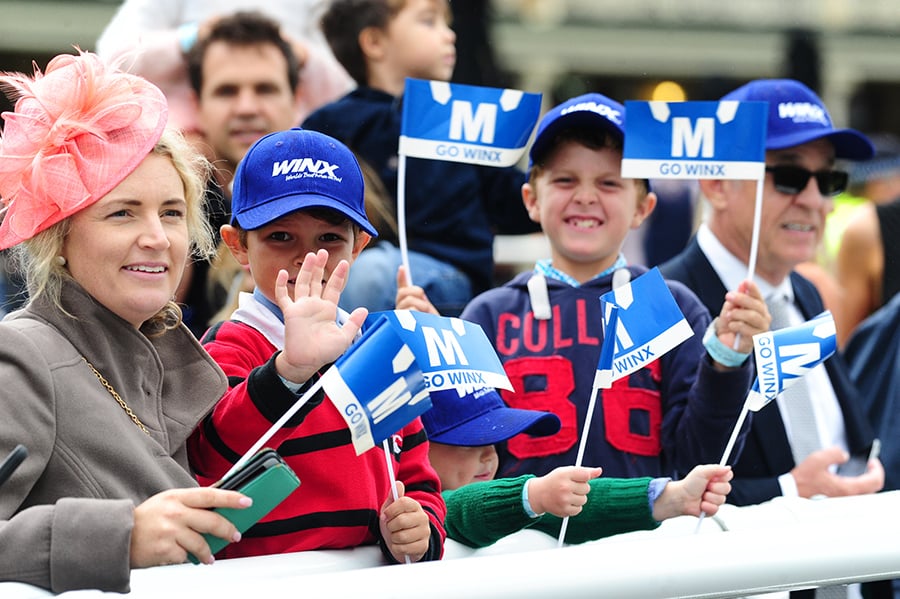 The world’s best on turf led the way as Magic Millions graduates starred across Australasia on a massive day’s racing with no fewer than 10 individual stakes wins.

Winx was again the star act of the afternoon – overcoming a heavy track to lead home a Magic Millions 1-2 result in the Group One Chipping Norton Stakes at Randwick.

Going from seventh to the lead in what seemed the blink of an eye, Winx was sensational – racing away to beat Lasqueti Spirit as the Magic Millions girls proved a class above.

A $230,000 Gold Coast Yearling Sale purchase for Magic Bloodstock, Winx has now earned over $9.8 million and she looks right on track for her future autumn targets.

The win was the 10th at Group One level for Winx and in winning she went past Phar Lap’s longest consecutive winning streak.

Earlier in the afternoon the outstanding WA bred and owned star Black Heart Bart won his fifth Group One in the Futurity Stakes at Caulfield.

One of the most popular gallopers in the country, Black Heart Bart came with a strong finishing run to grab his stablemate Tosen Stardom in the last stride.

A $20,000 Perth Yearling Sale purchase from Lakeside Thoroughbreds, Black Heart Bart has earned over $3.4 million for his owners led by his yearling sale purchaser Kim Renner.

A son of Blackfriars, Black Heart Bart is now the winner of 16 races including 14 at stakes level.

Trainer Darren Weir was delighted to snare the two main autumn goals for his star performer after his previous start win in the CF Orr Stakes.

Weir said there were Adelaide or Sydney races as likely targets for the gelding – the recently boosted $1 million Goodwood at Morphettville, a race he won last year, a possible goal.

Stratum Star made it three feature wins in succession in three states in three different months when he scored a tremendous win in the Group Two Peter Young Stakes also at Caulfield.

The $165,000 Gold Coast Yearling Sale purchase won the $ 1million Group One Kingston Town Classic in December and the $1 million Magic Millions Trophy in January prior to today’s outing.

Now the winner of over $2.35 million, Stratum Star was purchased from Widden Stud by his original trainer Rick Hore-Lacy before his retirement and transfer to Weir.

The five-year-old entire, who has studs circling, is now being aimed at the Group One Australian Cup at Flemington in March.

Farson continued his rise through the grades when he scored a dominant win in the Group Two Autumn Classic at Caulfield.

A son of Snitzel prepared by Gai Waterhouse and Adrian Bott, Farson was on the speed for much of the race before storming to the front on straightening.

The rising talent kept going strongly to the line under Stephen Baster to win handsomely and made it four wins from five lifetime starts.

A graduate of Turangga Farm, Farson was purchased for $180,000 at the 2015 Gold Coast Yearling Sale and he’s already earned over $200,000 and connections are predicting a bright future ahead.

The daughter of Onemorenomore doesn’t currently hold a nomination for the Slipper and the team from Emirates Park would have to pay a late entry fee to put their quality filly in the field.

One More Honey was sold at foot with her dam One Funny Honey at the 2014 Magic Millions Patinack Farm Complete Dispersal Sale for $50,000.

One Funny Honey was at the time of the sale in foal to Lope de Vega and that resultant foal, a colt, is catalogued as Lot 211 at the 2017 Magic Millions Adelaide Yearling Sale for Stockwell Thoroughbreds.

A $110,000 Gold Coast Yearling Sale purchase from Sledmere Stud, as agent for Waikato Stud, Gold Fever is by Savabeel and from the Karrakatta Plate winner Gold Rocks.

Gold Fever was purchased at the Gold Coast by Te Akau Racing’s David Ellis – continuing his outstanding record from the same sale ring. His past Gold Coast sale purchases include Princess Coup, Tell a Tale, Costa Viva, Integrate and Sebrose.

Silent Sedition added another feature win to her impressive career resume when she scored a dominant on speed win in the Group Three Mannerism Stakes at Caulfield.

Prepared by Andrew Noblet and ridden by Blue Diamond Stakes winning jockey Craig Williams, Silent Sedition let her class do the talking and she cruised home to win well.

A $45,000 purchase for Andrew Noblet in conjunction with Tom Curnow at the 2014 Perth Yearling Sale, Silent Sedition is a daughter of War Front bred by prominent WA breeder Ellie Giles of Korilya Stud.

Last week the connections of Silent Sedition paid $170,000 for her half brother by leading first season sire Gingerbread Man at the 2017 Perth Yearling Sale at Belmont.

Prepared at Morphettville by Gordon Richard, Benz proved too good at his first run for the preparation, easily beating home his Victorian rivals.

A son of Bushranger, Benz was purchased by Richards for $37,000 at the 2015 Magic Millions Adelaide Yearling Sale from the draft of DM Bloodstock of Bendigo.

Richards said he was unsure where Benz would head to next – but he would look for a suitable race in Melbourne in a fortnight.

The cleverly named Benz is from the Encosta de Lago mare Mycedes and has now earned over $280,000 thanks to six wins from just 10 starts.

Talented stayer Boom Time and rising Perth talent Gangbuster completed a massive day for Magic Millions graduates when they both won listed races on the day.

Boom Time proved too strong for his rivals in the Mornington Cup Prelude at Caulfield for David and Ben Hayes and Tom Dabernig.

A Perth Yearling Sale graduate in 2013, Boom Time is a son of Flying Spur and today’s race was his first since running fifth in the Magic Millions Trophy over 2200 metres in January.

Gangbuster was purchased by connections at the 2015 Perth Yearling Sale for $90,000 from the draft of Gervase Park Stud.