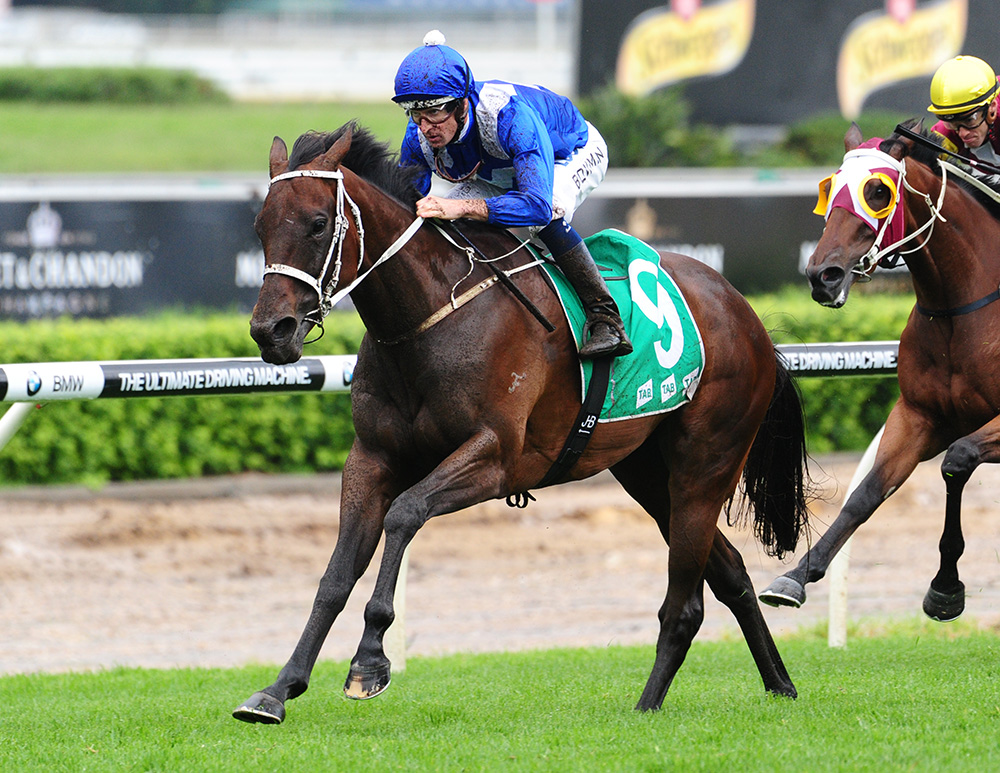 Champion galloper Winx made it ten Group One wins and eclipsed one of Australia’s greatest racehorses when she cruised to victory in today’s Group One Chipping Norton Stakes at Randwick.

In surpassing the longest winning streak of Hall of Fame legend Phar Lap, Winx made it 15 straight and added yet another bow to her incredible list of achievements.

The only main concern for connections was the worsening track condition and the mare’s safe journey during the Sydney feature race.

As the rain continued to fall during the morning and afternoon the big question on sports fans lips was – would Winx run at Randwick.

Trainer Chris Waller weighed up a number of things and inspected the surface with the track manager and decided his champion would take her place.

Punters backed her opponents, the longshots were movers and her arch rival Hartnell was well supported. But in the end it was Winx and all Winx.

In seventh place for much of the race, the champion daughter of Street Cry was switched to the outside of her rivals and in what seemed a matter of strides she steamed past her opponents.

Hartnell appeared stuck in the mud as Winx whistled past. In the end if was the reigning Victoria Oaks winner Lasqueti Spirit who was closest at the finish, a brave second for the fellow Gold Coast Yearling Sale purchase.

Part owner Peter Tighe revealed it was one of his toughest days at the track – the uncertainty over a start and her abilities to get through the heavy 9 (then 10) track.

“The interest of the horse was paramount,” Tighe said. “We made a final decision after the sixth race.”

“We were guided by Chris – he makes the decisions,” he added.

Waller said the track inspection he conducted midway during the card was enough to confirm the mare a runner.

“When I went and walked the track it was pretty good considering. I knew the track was safe and that’s the most important thing.”

“It’s a pretty amazing thing and to have the crowd behind her, it’s very special. I was just glad she was able to race and do that.”

Jockey Hugh Bowman also said the track was perfectly safe, but indication his champion four-legged partner would be much better suited on top of the ground.

“Today the conditions are wet, but they are even and fair and every horse is getting its chance,” Bowman said.

“He (Waller) asked me what I thought early in the day and I thought she would be fine and he monitored the conditions and in the end it’s his decision – he does the right thing by the horse.”

“I think she would have been comfortable if the track wasn’t as bad as it was. She got the job done – but she’s more effective on good ground.”

“She’s a wonderful mare. Riding her is the easiest part to be honest. With her and her fame comes a lot of extra curricular activities – but when we’re both comfortable I enjoy it just as much as anyone else,” Bowman added.

A $230,000 purchase for Magic Bloodstock from the Coolmore Stud draft at the 2013 Magic Millions Gold Coast Yearling Sale, Winx is now the earner of over $9.8 million.

Winx was bred by the Camilleri family’s Fairway Thoroughbreds, an operation which also bred and sold Golden Slipper winner Vancouver on the Gold Coast.

She is a daughter of champion international sire Street Cry and from the twice stakes winning Al Akbar mare Vegas Showgirl – herself a buy from the Magic Millions National Broodmare Sale after retirement from the track.

Vegas Showgirl’s other runner to date, the homebred El Divino, is a group winner as well.