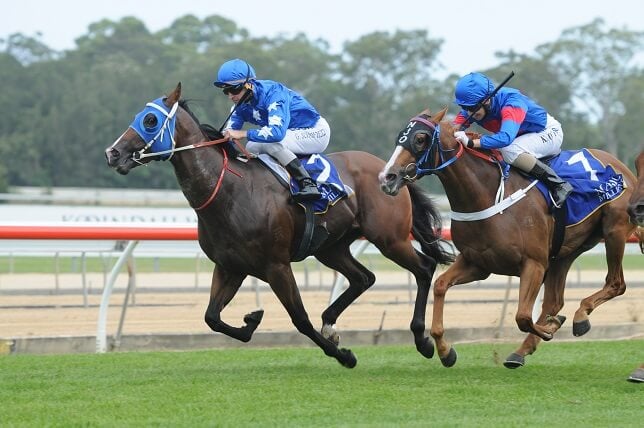 Sent out the warm favourite after an impressive debut second to fellow Magic Millions graduate Voilier on December 4, Zoutenant held out debutant Surf Seeker to win by a nose.

It was a thrilling three way finish with proven Sydney winner Single Gaze a further long head back, between runners, in third place.

Zoutenant was purchased for $105,000 from the draft of Turangga Farm and will now be headed to Queensland for the state’s most important juvenile event.

“He had a run the other day,” Moses said. “I ran him when he wasn’t fit but I thought he might need the prizemoney to get into this race.”

“We’ll go the race on the Gold Coast now and he’ll improve on that.”

“I put the blinkers on,” Moses pointed out. “I don’t like putting them on early but I thought the prizemoney was too good and I thought I would have to put them on. He only just won, but that’s all they have to do,” Moses summed up.

Winning rider Glyn Schofield said the winning margin of a nose didn’t do justice for his mount considering his wayward manners over the concluding stages.

“He nearly gave it away but it was a good win,” a relieved Schofield said after the race.

“He was going sideways instead of forward. Fortuntately he did enough to win. He’s probably won a little easier than the margin suggests.”

“He’s progressive,” Schofield said. “He showed first up he was fresh. Second up today he got the win on the board. He’s an exciting young horse.”

A son of Zizou, himself a Magic Millions graduate, Zoutenant is one of three winners, from three to race, for the stakes winner Tenant’s Tiara.

A daughter of Beautiful Crown, Tenant’s Tiara won a listed Eskimo Prince Stakes and was second in a Group Two Sapphire Stakes before being sold at the National Broodmare Sale to Turangga Farm. Tenant’s Tiara was also a Magic Millions yearling, purchased for $20,000.

Meanwhile, Aerobar booked a trip north for a dash for cash after an impressive win in today’s $100,000 Wyong Magic Millions 3YO Stakes (1200m).

Coming off a brilliant trial win at Warwick Farm on December 9, Aerobar proved too strong in today’s feature for three-year-olds, cruising home under James McDonald to beat the favourite Echo Gal by a length and a quarter.

“She got lost down the straight at Flemington – she lost her way half way down,” Ryan reported.

“I don’t understand what happened to Rosehill.”

“We put blinkers on and took her to the trials, she went really good and her work has been good since.”

“I think she is a filly who has to roll along,” Ryan noted.

“She will probably go to the sprint race. We’ve learned she is a sprinter and not so much a horse who will run 1400 metres.”

The filly heading to the auction is just the second live foal for Flavoured who won three races at distances from 900 to 1100 metres.

Flavoured is from the Seattle Slew mare Almond Essence, a daughter of a Danzig half sister to Group One winners and leading sires A.P. Indy and Summer Squall.

Last year’s Wyong feature winners Unencumbered and Sweet Idea both went to the Gold Coast and won on Magic Millions raceday after triumphing at Wyong. Only time will tell if that double can be completed again.